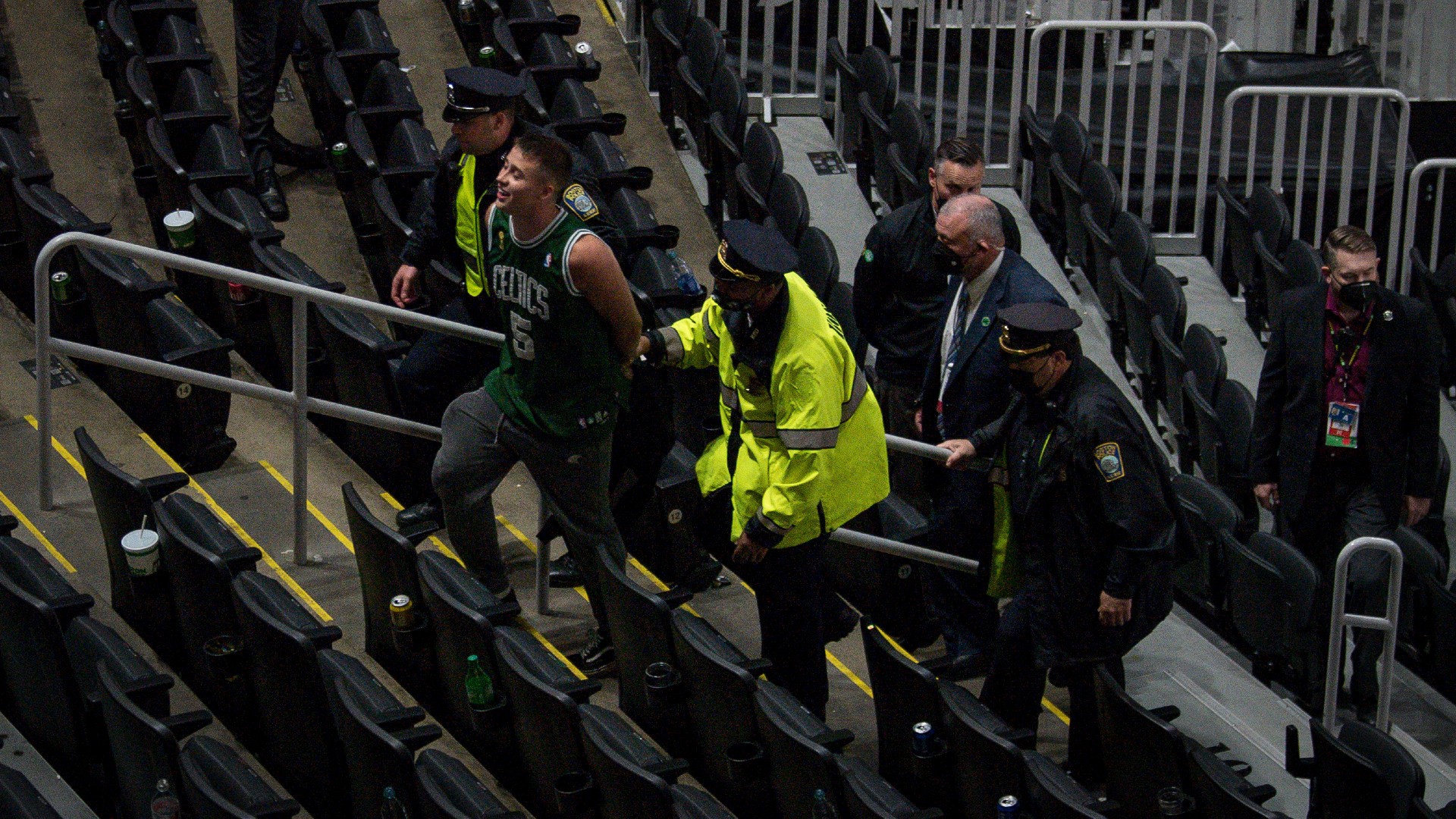 The 2021 NBA playoffs have been marred by a series of ugly fan-related incidents that continues to push toward a boiling point.

Incidents across five NBA venues have illustrated fans behaving badly in various fashions. From objects being thrown at players to racist heckling in the stands, it has become an almost every-night problem in the playoffs. Star players such as Russell Westbrook, Kyrie Irving and Trae Young have been targeted.

Wizards guard Russell Westbrook walked off the court in the fourth quarter of a Game 2 loss to Philadelphia, and that’s when a fan dumped popcorn on his head. Westbrook had to be restrained by security guards at Wells Fargo Arena.

The 76ers revoked the fan’s season tickets and apologized to the Wizards. Westbrook responded to the incident, saying “this s— is getting out of hand, especially for me.”

“This s— is getting out of hand, especially for me. The amount of disrespect, the amount of fans just doing whatever the f— they want to do. It’s just out of pocket, man.”

—Russ after a fan poured popcorn on him in Philly pic.twitter.com/NLvjg8fg3S

A Knicks fan spits on Atlanta’s Trae Young during Game 3 of the first-round series against the New York Knicks at Madison Square Garden. The fan was standing in the second row when he spit near Young on an out-of-bounds play.

Young addressed the incident before Game 3, saying “I saw the video, and it’s disgusting.” The fan was banned indefinitely from Madison Square Arena.

as they should . my family should be able cheer for me & my teammates without getting inappropriate shit said to them 💯 https://t.co/CWiJIpkq03

Ja’s father Tee told ESPN.com that the comments were vulgar and racist in nature.

“I know heckling,” Tee Morant said in a phone interview with ESPN on Thursday night. “We were doing that the whole game. But that’s different than heckling. That’s straight up disrespectful. That was too far out of line. You don’t say nothing like that heckling. That’s beyond heckling.”

Celtics forward Tristan Thompson addresses the playoff incidents with fans with a loaded response. Thompson said he would tolerate a fan spitting on him during a game.

The Celtics’ Tristan Thompson says he did have Boston fans direct racist comments at him when he was an opponent here, but not since he joined the team. As for the incident involving Trae Young at MSG, Thompson said: “I dare a m-fer to spit on me. I’ll follow you to your house.”

Irving scored 39 points in a 141-126 victory against Boston in Game 4 of the first-round series; a game in which Irving stepped on the Celtics’ logo at halfcourt before putting on the show.

The performance was marred, however, when Cole Buckley, 21, threw a water bottle that grazed Irving’s head as he was exiting toward the TD Garden tunnel. Buckley is charged with assault and battery with a dangerous weapon and will be arraigned on June 5. He was given a lifetime ban from the arena.

New York guard Immanuel Quickley tells reporters a beer was thrown near him and Nerlens Noel toward the end of Game 2 against the Hawks at Madison Square Garden. The Knicks won the game 101-92, which makes the incident that much more out of place.

Immanuel Quickley says a beer was thrown near him and Nerlens Noel at the end of Game 2, which was at Madison Square Garden. Said he didn’t know why.

“I guess that’s part of having fans at the games,” he said

A fan ran on the court during Game 4 of the series between the 76ers and Wizards with 3:40 left in the third quarter. The fan jumped up and touched the backboard before being tackled by security at Capital One Arena.

The Wizards released a statement afterward that said: “During this evening’s game, a fan was apprehended by Capital One Arena Special Police after attempting to breach the court. He will be banned from the arena and charges are being pursued with DC MPD.”