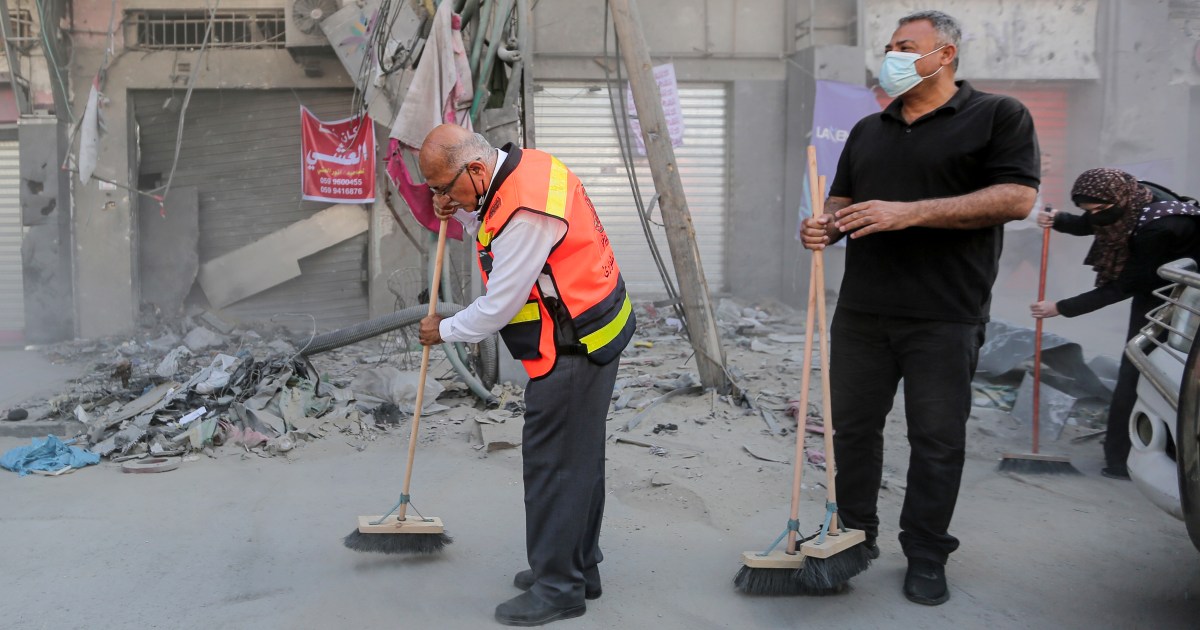 Gaza City – Thousands of Palestinians took to the streets in a campaign to clean up the destruction wreaked by Israel’s bombardment in its 11-day offensive.

Under the slogan “We Will Rebuild It”, volunteers began clearing rubble from the site of what once used to be the Shorouq building – one of Gaza City’s oldest high-rises that was levelled by the Israeli military.

Ahmad Murtaja, who came with his family and friends, said he joined the campaign to “bring back life to streets that have witnessed so much destruction in 11 days of war”.

“It’s also a way to heal the wounds of what we have witnessed and to rebuild society,” he said.

The clean-up focused on the upscale Rimal neighbourhood – which was heavily targeted by Israeli artillery shelling and air raids – and included al-Wehda street, where 42 people were killed in a single day.

Hosny Mohanna, the campaign’s spokesperson, told Al Jazeera at least 3,000 people showed up to help the effort, which is primarily about removing remnants of “Israeli aggression”.

“The turnout and enthusiasm we have seen is testament to our people’s resilience,” he said.

Ghada Ibrahim, who heard of the campaign on social media, told Al Jazeera: “By cleaning up the streets together, that’s a sign that there’s still hope in Gaza.”

‘We deserve to live’

The campaign, which began on Sunday, is expected to continue for a week and will comb through the neighbourhoods pounded by the Israeli military.

According to Gaza’s ministry of public works and housing, at least five high-rise buildings, 74 government facilities, and 33 media institutions were destroyed. Additionally, 1,800 housing units were wrecked.

At least 248 Palestinians, including 66 children and 39 women, were killed in the recent offensive, with more than 1,900 others wounded. In Israel, 12 people died, including three foreign workers.

“We want to show the world that Gaza is worthy and that we deserve to live,” Mohammed Abu Rujeila, a volunteer, said.

“No matter how many times the Israeli occupation destroys we will always be here to rebuild, each time even more so than the last.”

Biden calls on Congress to act on expiring eviction ban

Biden calls on Congress to act on expiring eviction ban