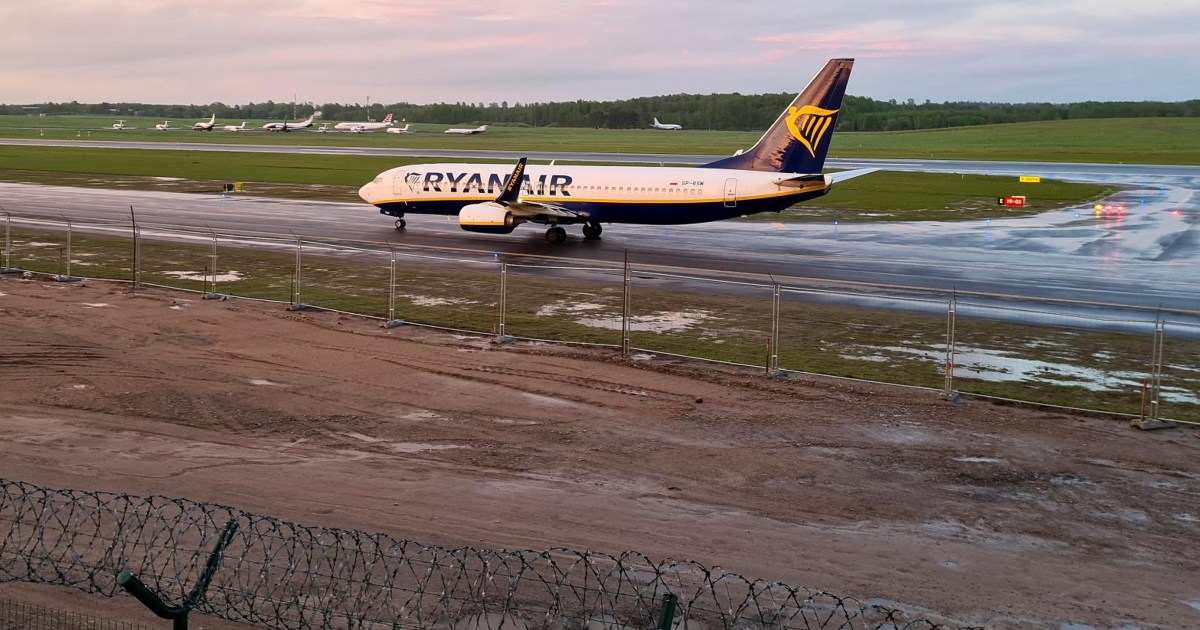 Belarus has said a false bomb threat that prompted a passenger plane to be diverted to Minsk, where authorities arrested a journalist on board, was written in the name of the Palestinian group Hamas.

Authorities released on Monday what they said was the text of the bomb alert as officials sought to defuse a mounting international outcry over what Western capitals have denounced as an act of “state piracy”.

Minsk scrambled a warplane to escort a Ryanair flight on Sunday, flagging a bomb alert that proved false once the plane had made an unscheduled landing in Belarus where authorities arrested Roman Protasevich, a journalist critical of Belarusian President Alexander Lukashenko.

Western governments are threatening new sanctions against the former Soviet republic led by Lukashenko over the diversion of the flight from Greece to Lithuania as it flew through Belarusian air space.

US President Joe Biden was briefed on the incident and NSA Jake Sullivan raised the issue in his call with the secretary of the Russian Security Council, said White House Press Secretary Jen Psaki.

She added the administration condemned what she called the “shocking act” of diverting a flight to detain a journalist.

“It constitutes a brazen affront to international peace and security by the regime. We demand an immediate international, transparent and credible investigation of this incident,” she said, adding the United States was in touch with NATO, the European Union, the Organization for Security and Cooperation in Europe, among others about the next steps.

EU leaders were particularly forceful in their condemnation of the arrest and the move against the plane, which was flying between two of the bloc’s member nations and was being operated by an airline based in Ireland, also a member.

The bloc summoned Belarus’s ambassador “to condemn the inadmissible step of the Belarusian authorities” and said in a statement the arrest was yet again “another blatant attempt to silence all opposition voices in the country”.

Lithuanian President Gitanas Nauseda urged the EU to take “clear actions in order to change the pattern of behaviour of this very dangerous regime”, and said a previously planned EU summit on Monday would assess whether to close its airspace to Belarus carriers, declare Belarusian airspace as unsafe and expand sanctions against Lukashenko’s government.

German Chancellor Angela Merkel condemned the “unprecedented action” of the Belarusian authorities and demanded that Protasevich and his girlfriend, Sofia Sapega, be released immediately.

British Transport Secretary Grant Shapps said he instructed the UK Civil Aviation Authority “to request airlines avoid Belarusian airspace in order to keep passengers safe”. He added he was suspending the permit allowing the Belarusian airline Belavia to operate in the UK.

Ukraine President Volodymyr Zelenskyy ordered officials to move to cut the air link with Belarus and ban Ukrainian flights via its airspace.

In Minsk, the foreign ministry’s spokesman said Belarus had acted in line with international regulations and a senior transport official read out what he said was the text of the bomb threat.

“We, the soldiers of Hamas, demand that Israel ceasefire in the Gaza Strip. We demand that the European Union withdraw its support for Israel in this war,” said the head of the transport ministry’s aviation department.

“There is a bomb on that plane. If you do not comply with our demands, the bomb will explode over Vilnius on 23 May,” he said.

Hamas spokesman Barhoum said the group “has nothing to do with that completely”.

The Palestinian group and Israel are on the fourth day of a ceasefire after 11 days of hostilities, the worst outbreak in fighting between Israel and Hamas in years.

“We don’t resort to these methods, which could be the doing of some suspicious parties that aim to demonise Hamas and foil the state of world sympathy with our Palestinian people and their legitimate resistance,” the Hamas spokesman said.

Igor Golub, head of the Belarusian air force, said the Ryanair crew took the decision to divert to Minsk itself and that the fighter jet was sent to escort it only after it turned to fly towards the Belarusian capital.

The Belarusian foreign ministry spokesman said Minsk would guarantee full transparency in the case and would also be prepared to allow foreign experts to be involved in an investigation.