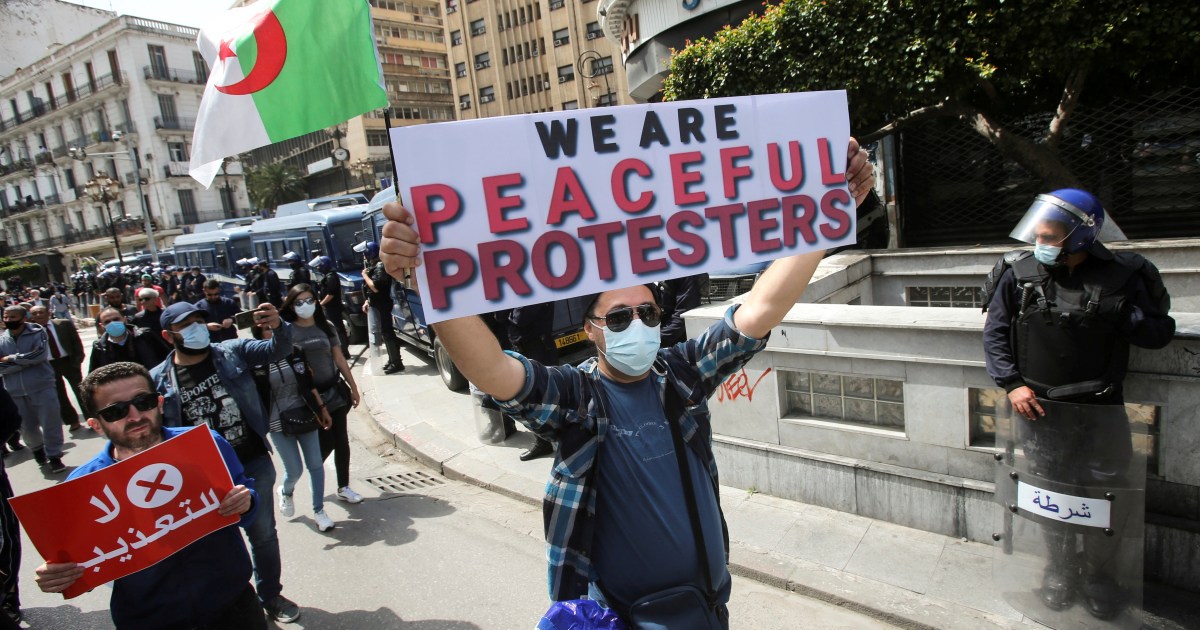 Several hundred protesters were arrested in Algeria as authorities ramp up efforts to quell a years-long protest movement that has demanded root-and-branch political reform.

Said Salhi, head of the Algerian League for Human Rights, said about 800 people were detained in Algiers and 19 other governorates across the North African country on Friday.

The majority were released but 40 people remain in custody, he wrote on Twitter.

Heavy police presence in the capital prevented their weekly march from taking place, local media reports said, with police blocking roads and regular protest routes from early in the morning.

“For the 118th Friday [since the first Hirak protests], ‘Algiers the White’ has turned police blue,” said Lyes, a man in his 40s who declined to provide his surname, referring to the capital by its Arabic moniker.

The largely leaderless and politically unstructured Hirak movement was launched in 2019 over then-president Abdelaziz Bouteflika’s bid for a fifth term in office.

The ailing leader was forced to step down weeks later, but Hirak has continued its demonstrations, demanding a sweeping overhaul of a ruling system in place since Algeria’s independence from France in 1962.

Marches were suspended for about a year due to the coronavirus pandemic, but protesters have returned to the streets since February and given the movement new momentum.

The interior ministry last week said Hirak protest organisers would have to advise authorities of demonstrations in advance, a move that came amid mounting government pressure on the movement as early legislative elections approach.

Hirak has rejected the June 12 vote, and human rights organisations have warned of increasing repression in the lead-up to the polls.

At least 133 people are currently detained in connection with the Hirak movement or cases related to freedom of expression, according to Algerian Detainees, a journalist-run website.

Two protesters who returned to the streets in February, Ahmed Abdiche and Mohamed Badji, decided before Friday they would not try to march, expecting a crackdown. Both said, however, it would not end their quest for change.

“Hirak will continue whether through marches or other methods. But we will stick to peaceful ways,” said Abdiche.

“Using force to stop our marches will change nothing because we are determined to achieve our goals and will not step back,” said Badji.

Protesters have been adamant that the military give up its political role and allow free and fair elections to take place.

The movement boycotted the election of Bouteflika’s successor, Abdelmadjid Tebboune, in December 2019 and a referendum he held on changes to the constitution in November 2020 that was passed with a dismal turnout of 25 percent.

However, with the economy in deep trouble because of declining energy revenue and the global pandemic, and after some of Hirak’s immediate goals were met, many of its initial supporters have since decided to stop protesting.

“The time has come to opt for dialogue and end this crisis. Marching and shouting slogans won’t solve our problems,” said one former demonstrator Ali Bachiri.