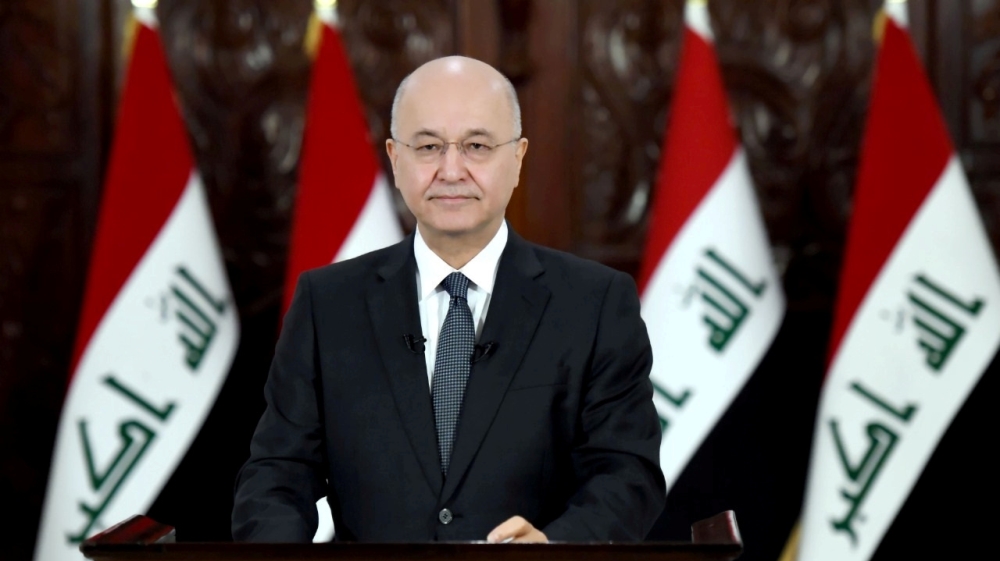 President Barham Salih confirms Iraq hosted more than one round of talks between Iran and Saudi Arabia, and that talks were still ‘ongoing’.

Iraq has hosted more than one round of talks between regional foes Iran and Saudi Arabia, Iraqi President Barham Salih said.

Salih made his remarks during an interview on Wednesday broadcast live online with the Beirut Institute think-tank. He gave no more details.

Diplomats hope the opening of direct channels between Iran and Saudi Arabia will signal a calming of tensions across the Middle East after years of hostilities that have brought the region close to a full-scale conflict.

Baghdad hosted talks between officials from its two neighbours and mutual adversaries on April 9 in the only round of talks to have been previously reported.

Asked how many rounds of Saudi-Iranian talks Iraq had hosted, Salih replied: “More than once.”

For Iraq, hosting the talks is seen as a significant step for Baghdad, which has consistently sought to play the role of a regional mediator.

Salih echoed that, saying: “It is ongoing, and it is important and it is significant, and for Iraq to be able to play that convening role between these regional actors is important.”

Salih’s confirmation comes after Saudi and Iranian officials have softened their language and said they are prepared for reconciliation.

Saudi Crown Prince Mohammed bin Salman said his country seeks positive and special relations with Iran, remarks that have been welcomed by the Iranian foreign ministry.

The two countries severed diplomatic relations in 2016 and are currently facing off in multiple proxy conflicts, including in Yemen.

Salih also said that he wished to see a solution to the Iran-United States rivalry that has fuelled violence in Iraq.

“The Middle East has been condemned to a cycle of conflict and instability over the last few decades … It’s time to move beyond,” Salih said.

In recent weeks Washington and Tehran have engaged in indirect talks in Vienna that seek to revive an international pact reached in 2015 that constrained Iran’s nuclear ambitions in return for sanctions relief.

Former US President Donald Trump pulled out of the deal in 2018 and imposed harsh sanctions on Iran and its regional allies, increasing tension as Iran-backed militias attacked US forces in Iraq and a series of attacks hit oil installations and tankers in the Gulf, where Washington counts Arab states such as Saudi Arabia among its close allies.

The killing of Iranian general Qassem Soleimani in a US air strike in Baghdad in January 2020 brought the region close to war. Iran responded with limited missile strikes against a US base in Iraq, the first such direct attack, but took no further action.

Iraqis hope for a general regional detente that would allow their country to rebuild instead of being used as an arena for US, Gulf Arab and Iranian score-settling.

Iraq is trying to rein in powerful Iran-backed militias and deal with a resurgent ISIL (ISIS) group that took over a third of Iraq in 2014 and was beaten militarily in 2017 by US forces, the Iraqi military, Kurdish fighters and Iran-aligned paramilitaries.

“The war against ISIS and terrorism cannot be won by (only) military means,” Salih said. “We have succeeded in liberating our land with the help of our friends but terrorism remains.”