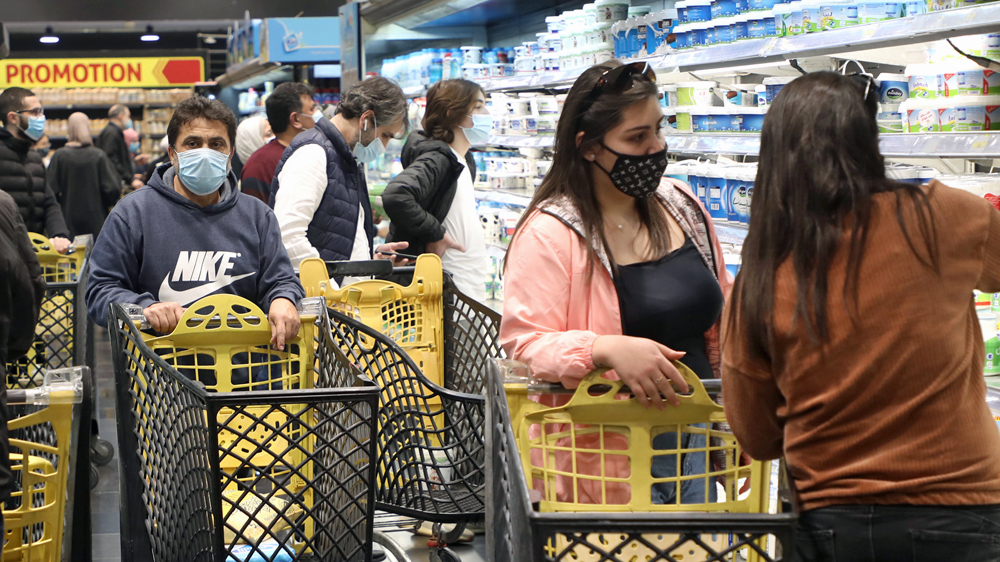 Beirut, Lebanon – Lebanon’s caretaker Prime Minister Hasan Diab says his government wants to introduce a cash card programme to offer struggling citizens a safety net for buying essential items after subsidies that drain the country’s foreign reserves are withdrawn. But he fears Parliament and Lebanon’s central bank will not throw their support behind the proposal.

Lebanon subsidises fuels, medicines, wheat, and other basic food items that the central bank imports at the official exchange rate of 1,507 Lebanese pounds to $1 – an obsolete rate that has not changed despite the country’s deep economic crisis that ignited in October 2019.

Meanwhile, at market exchange rates, the pound has lost some 85 percent of its value against the dollar.

In an interview on Monday with Al-Hurra, a US-based Arab satellite channel, Diab said subsidies cost the government $5bn a year, while cash cards would cost only $1.2bn – saving the state about $3bn annually.

But he does not believe those compelling maths are enough to secure the support he needs from Parliament or the central bank to push through the plan.

“We have faced opposition from day one for everything we have done,” Diab said during the Al-Hurra interview. “We cannot lift subsidies without agreeing on cash cards.”

Diab is proposing to give cash cards loaded with United States dollars to about 750,000 vulnerable families after subsidies are lifted. Those dollars would then be converted into Lebanese pounds when goods are bought.

But key details of the plan are still unclear, such as the exchange rate that would apply to the cards, what exactly can be bought with them, or how families would be vetted to determine eligibility and benefit levels.

A ministerial source told Al Jazeera that the cabinet had discussed Diab’s plan among other cash card programmes on Tuesday, including one that the caretaker Economy Minister Raoul Nehme presented last December.

Diab has reportedly proposed to lift all government subsidies, with the exception of medicine and wheat.

The clock is ticking

Time is running out for Lebanon to reform its expensive subsidies programme that is draining the central bank of precious foreign reserves.

The country’s caretaker Finance Minister Ghazi Wazni warned last month that the situation is so dire that Lebanon will no longer be able to afford to fund subsidised imports by the end of May. Meanwhile, central bank Governor Riad Salameh appears unwilling to lower the country’s mandatory foreign exchange reserves below $15bn to buy more time.

The subsidies programme – which is universal, meaning all Lebanese benefit from it – has drawn fire not only for its price tag. The United Nations Children’s Fund Lebanon said last year that “a rough analysis shows that up to 80 percent of subsidies may actually benefit the wealthiest 50 percent of the population, with only 20 percent going to the poorer half”.

“Richer people can afford to buy more goods, so they end up benefitting from most of the subsidised items,” Sami Zoughaib, an economic researcher, told Al Jazeera. “And the network of merchants, all close to the political elite, often hoard goods or smuggle them into Syria [for more profit].”

The United Nations reckons that more than half of Lebanon’s population currently lives below the poverty line. The economy shrank 25 percent last year, according to the International Monetary Fund (IMF), while inflation hit 88 percent. The outlook is so uncertain this year that the IMF will not even make a call as to how bad things could get.

While the cash cards could save Lebanon money, the state still needs to fund the programme.  But political paralysis remains an obstacle.

International donors have pledged billions of dollars in assistance to Lebanon, but the country’s political elites have failed to implement the necessary reforms to unlock that desperately needed aid.

Diab said he asked the Qatari government to support the subsidies cash card programme during his visit to Doha in late April. But he says the onus would still be on Parliament and the central bank to secure other sources of funding.

During the Al-Hura interview, Diab said the central bank might have to partially fund the cash cards if Lebanon fails to secure international help.

“There is no doubt [the Central Bank will help] if there is no source from abroad. There is no other alternative,” he said, adding it would still significantly reduce wasteful spending as opposed to the subsidies.

But some are concerned that despite the savings, a cash card programme could have unintended negative consequences.

Mohamad Faour, a postdoctoral research fellow in finance at University College Dublin worries that cash cards could heap even more pressure on the lira.

“Someone who used to import fuel now cannot get dollars through the central bank, but only through the black market,” he told Al Jazeera. “So the value of the lira [Lebanese pound] will decline because of the greater demand for dollars and less supply.”

Faour added that piecemeal fixes could do more harm than good in the absence of a comprehensive economic reform plan, which remains stalled thanks to political sclerosis.

After the Al-Hurra interview, several members of parliament voiced their disapproval of Diab’s proposal.

Meanwhile, in Parliament, MP Yassine Jaber told Al Jazeera that the cabinet had not yet presented a plan to lawmakers, but has followed up with “the main headlines”.

“We’re not against lifting subsidies, but we need a social policy,” Jaber said. “We want to cooperate with the government, but the devil lies in the details.”

Parliament’s Finance and Budget Committee meets on Thursday, but Jaber says the subsidies and ration cards are not on the agenda just yet.

The MP claims the cabinet is far better equipped to prepare a plan with advisers and more access to economic studies and reports.

“We are in favour of working on the plan, but let the government present it so we can debate and discuss it,” he said. “If it’s good a plan, then why not? We want to stop the continued financial waste.”