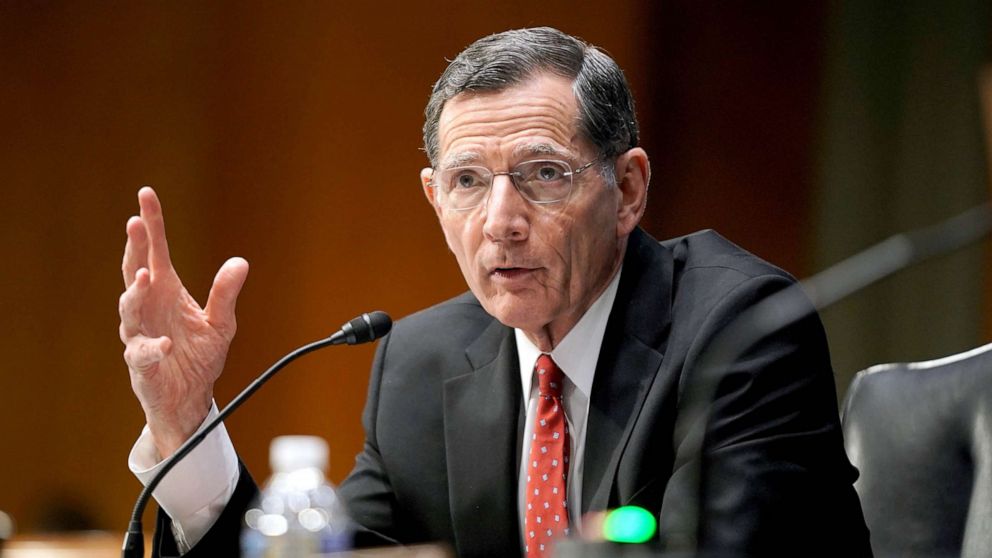 The Republican from Wyoming said he believes a compromise can be made.

President Joe Biden’s spending is “like someone with a new credit card,” Sen. John Barrasso, R-Wyo., said Sunday on ABC’s “This Week,” signaling difficulty ahead for the expansive presidential agenda laid out in the past week, but also pointing to potential successes in terms of what GOP leaders may compromise on going forward.

“And these are things that we don’t necessarily need — we certainly can’t afford — but they’re going to delight the liberal left of the party,” Barrasso, the leader of the Senate Republican conference, told “This Week” co-anchor Martha Raddatz of Biden’s spending bills. So far, Biden counted a success on his nearly $2 trillion coronavirus plan, while working toward Congressional compromise on his $2 trillion infrastructure proposal and his $1.8 trillion American Families plan.

“Ultimately, someone’s going to have to pay for this. It’s almost creating an addiction to spending,” he added.

“I will tell you, Democrats are also getting concerned more about the call of this spending and borrowing, realizing that they’re going to be held accountable in the 2022 election. And some Democrats — publicly, but mostly privately — are saying this isn’t sustainable,” he said.

Raddatz pointed to a plan introduced by West Virginia Sen. Shelley Moore-Capito in late April, which significantly trimmed down the price tag to $568 billion and focuses exclusively on “core” infrastructure items like roads and bridges, broadband, airports, waterways, rails, ports and public transit. It excludes some big-ticket items in Biden’s proposal, including explicit funding for electric vehicles, housing and home care.

In criticizing the Biden proposal, Barrasso cited a figure used by Republicans in recent weeks that says Biden’s proposal only allocates 6% overall to roads and bridges. But Raddatz pushed back, saying it has been fact-checked as false.

“The total amount for what you would call ‘traditional infrastructure,’ roads, bridges, rails, airports, waterways, public transit, is more than 25% of the Biden plan. So do you want more?” she asked.

Barrasso said he believes a compromise can be made if some aspects of the plan are left behind.

“I’ve been working regularly with the other Joe — powerful Joe — in Washington, Joe Manchin,” he said. “So I actually believe there’s a deal to be had if we leave out things like the Green New Deal and recyclable cafeteria trays and climate justice, because $500 to $600 billion of infrastructure is a massive amount of infrastructure.”

A new ABC News/Ipsos poll out Sunday morning found that 67% of Americans feel that Republicans in Congress are not doing enough to work with the Biden administration.

Citing the poll, Raddatz asked Barrasso, “So are there places where you could compromise on the president’s agenda, where you see a good opportunity to meet him and Democrats in the middle?”

“Republicans went to the White House to meet with him on another coronavirus package, and we made really good faith efforts, he ignored all of it. They did this through budget reconciliation, by the slimmest margin of votes and ignored Republicans,” Barrasso said. “We want to work together with this administration.”