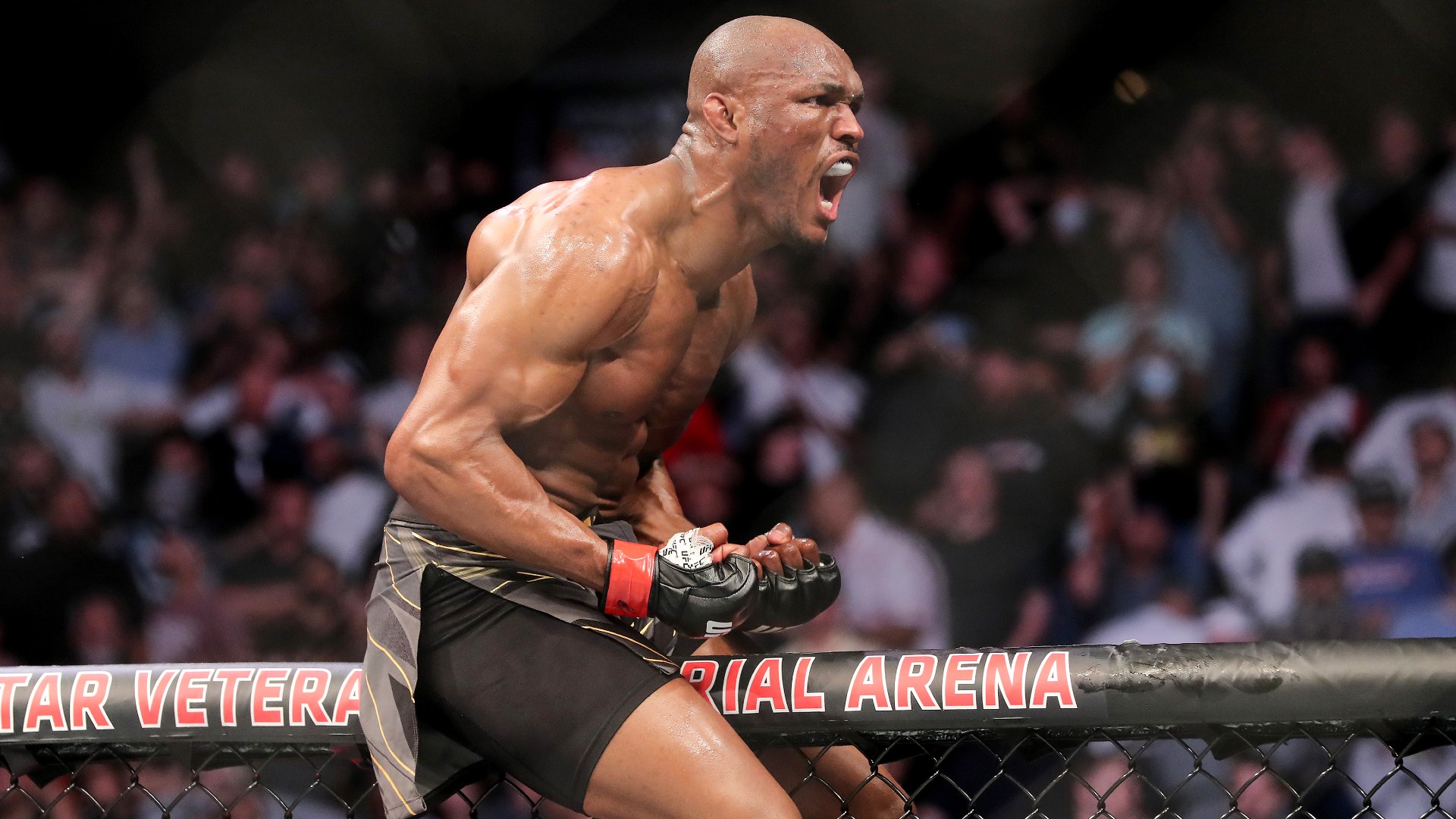 Kamaru Usman promised violence in his rematch with Jorge Masvidal at UFC 261. He made good on that promise with a vicious second-round knockout to retain the UFC welterweight championship and put his name on the short list of the best pound-for-pound fighters in the world.

Saturday’s card was the first UFC event to have a full house since the COVID-19 pandemic shuttered live sports in March 2020. The 15,269 fans on hand at VyStar VyStar Veterans Memorial Arena in Jacksonville, Fla., were treated to an excellent night of fights.

In their first meeting nine months ago, Usman defeated Masvidal by unanimous decision. Masvidal stated that the champion lacked punching power. Usman made it clear that he wanted to finish the job in the rematch. He did just that with a brutal right hand as he became the first fighter to finish Masvidal by knockout.

“Now I’m satisfied,” said Usman. “They said they wanted violence out here in Jacksonville, Florida and I went out there and gave it to them.”

It was a short night of fights at UFC 261 with a total cage time of 19 minutes, 56 seconds, and no fight made it out of the second round. Two champions retained while a new champion was crowned on the main card. But Usman’s stunning finish of Masvidal will be what is talked about the most.

Usman spent the first round using his jab and overhand right to keep Masvidal honest. Once Masvidal drew close, Usman exploded with a takedown and controlled the round. In the second frame, Usman was committed to striking and Masvidal appeared to be more than ready to exchange. Masvidal smiled after a right hand by Usman landed. What followed would be nothing for Masvidal to smile at.

Usman loaded up and fired an overhand right that detonated on Masvidal’s chin and sent “Gamebred” to the canvas in a heap. Usman pounced with follow-up strikes and finished the job at 1:02 of the second round to retain his title and improve to 14-0 in the UFC.

“Sky is the limit, I’m growing so much in the sport, I’m just blessed to be at this present time and moment,” Usman said. “It was a sweet one, it’s up there. If you look at the knockouts now that I’m putting together, that one’s up there for sure. That’s what I wanted to do, I said I’m so far ahead of these guys, I’m coming around and lapping these guys on the track, I’m coming around with a vengeance and I had to go out there and put the nails in that coffin and I did and we turn the page and move forward.”

Also on the card, Rose Namajunas shocked Weili Zhang with a head-kick knockout in the first round to regain the UFC women’s strawweight championship, and Valentina Shevchenko dominated Jessica Andrade with seven takedowns before finishing her with ground and pound to retain her women’s flyweight championship. In a frightening scene, Chris Weidman broke his leg with the first kick he threw against Uriah Hall in their middleweight showdown. Weidman had to be stretchered out of the arena in a scene that was eerily reminiscent of Anderson Silva breaking his leg against Weidman nearly eight years ago.

Round 2 (12:18 a.m.): Masvidal working the leg kicks. Right hand lands by Usman. Masvidal smiles. Usman crushes Masvidal with a right hand and Masvidal is out cold. It’s over!!!!

Round 1 (12:15 a.m.): Right hand by Usman lands and Masvidal laughs. Usman landing the jab and an overhand right. Masvidal hasn’t landed much of anything yet. Body kick by Masvidal but Usman explodes with a takedown. Masvidal working elbows off his back but Usman shoves one of his own into Masvidal’s grill. Masvidal working to get to his feet. Hard right hand by Usman and a jab.Usman loading up and spending a lot of energy. Masvidal with a leg kick. Flying knee attempt by Masvidal. Round ends 10-9, Usman.

11:55 p.m.: Four fights on the UFC 261 main card and there’s only been a total of 15 minutes of fight time. No fight has gone past the second round. The main event is up next as Kamaru Usman defends his UFC welterweight title against Jorge Masvidal in a rematch. Usman defeated Masvidal nine months ago by unanimous decision. However, Masvidal only had six days to prepare. They have both had full camps to prepare for one another. Will that make a difference in the rematch?

Result: In an absolute stunner, Rose Namajunas needed only one head kick to become UFC women’s strawweight championship once again. A streak of 21 straight wins by Zhang was ended in swift fashion as Namajunas wasted little time finding her range and firing one monster head kick that separated Zhang from her senses. An incredible finish for Namajunas while Zhang will need to go back to the drawing board.

Round 1 (11:47 p.m.): Zhang lands inside leg kicks and Namajunas is trying to find her range. Namajunas fires a head left kick and it demolishes Zhang! It’s over!!!! New champion.

11:28 p.m.: The second of three title fights is up next as Zhang Weili defends her strawweight title against former champion Rose Namajunas.

Result: This was total domination by Shevchenko. Knowing that Andrade’s only chance was to use her pressure and wrestling, Shevchenko made the conscious decision to beat the Brazilian at her own game. Using seven takedowns in less than two rounds, Shevchenko proved that she has no weaknesses. Clearly aware that Andrade was wilting, Shevchenko seventh takedown would be her last as she put Andrade ina crucifix and rained down punches and elbows. There’s nobody left for Shevchenko in this division. The only fight that matters is a third fight with Amanda Nunes.

Round 2 (11:22 p.m.): Another takedown to open the second round. She’s sapping the energy out of Andrade. Andrade gets to her feet and digs for a single leg takedown. Nope. Denied. Shevchenko takes her down again. Her seventh. Crucifix by Shevchenko. She’s dropping bombs. And it’s over. Total domination by the champion.

10:50 p.m.: This was unfortunate and the cruelest turn by the MMA Gods tonight. Weidman broke his leg in a way that was eerily reminiscent of how Anderson Silva’s leg broke against Weidman seven years ago. It was just 17 seconds into the fight and Weidman fired a leg kick that Hall checked. Weidman’s leg grotesquely snapped at the shin and the former champion collapsed in a heap as referee Herb Dean immediately called the fight off. It’s a frightening situation from which one can only hope Weidman can recover.

10:39 p.m.: Up next is former UFC middleweight champion Chris Weidman facing Uriah Hall. Weidman has a victory over Hall but that was over a decade ago and a lot has changed for both fighters. Weidman is likely on his last ride and the 36-year-old can’t afford to lose tonight while Hall has shown tremendous potential but hasn’t quite lived up to what everyone thought he could be. It is do or die for both fighters tonight.

Anthony Smith gets TKO with leg kick to Jimmy Crute

10:32 p.m.: Smith earned a first-round TKO against Crute after a leg injury from a leg kick prevented Crute from continuing. A competitive first-round changed when Smith landed a leg kick to Crute’s left leg caused his leg to give out. Crute tried to continue but it was clear that he couldn’t stand and the fight was stopped before the second round began. Prior to that, it was Crute who was landing the leg kicks while Smith was sharp with the jab. The fight was shaping up to be a good one until the Smith leg kick changed everything.

10:15 p.m.: We’re kicking off UFC 261 with a full house and a light heavyweight battle between Anthony Smith and Jimmy Crute. Smith bounced back from back-to-back losses with a first-round submission against Devin Clark while Crute has two straight first-round finishes.

9:43 p.m.: Randy Brown finished the job against Oliveira with a remarkable one-armed rear-naked choke in the first round. He put Oliveira down with a straight right hand early in the round and chased the Brazilian to the canvas. Oliveira attempted to escape but Brown got his back and wrapped one arm around his opponent’s neck. Oliveira tried to fight him off but Brown was squeezing hard and got the submission finish. There was clearly a bit of animosity between the two fighters but Brown directed fans to his Twitch channel for an explanation.

9:32 p.m.: The crowd at VyStar Veterans Memorial Arena has been on fire from the first fight. Obviously, they are pleased to be able to watch fights live despite concerns of the lingering COVID pandemic. We’ve had a few finishes and some decisions but fans don’t care and are ready to blow the roof off once the main card hits. But, for now, we conclude the prelims with Alex Oliveira facing Randy Brown.

The main card for UFC 261 will begin around 10 p.m. ET. Usman and Masvidal are expected to enter the Octagon at approximately 12:15 a.m. ET. The start time of the main event will depend on how long the earlier fights last.

The early fights on the UFC 261 card can be watched on ESPN or streamed via the Watch ESPN app. The main card will be available via ESPN+, which requires a subscription.