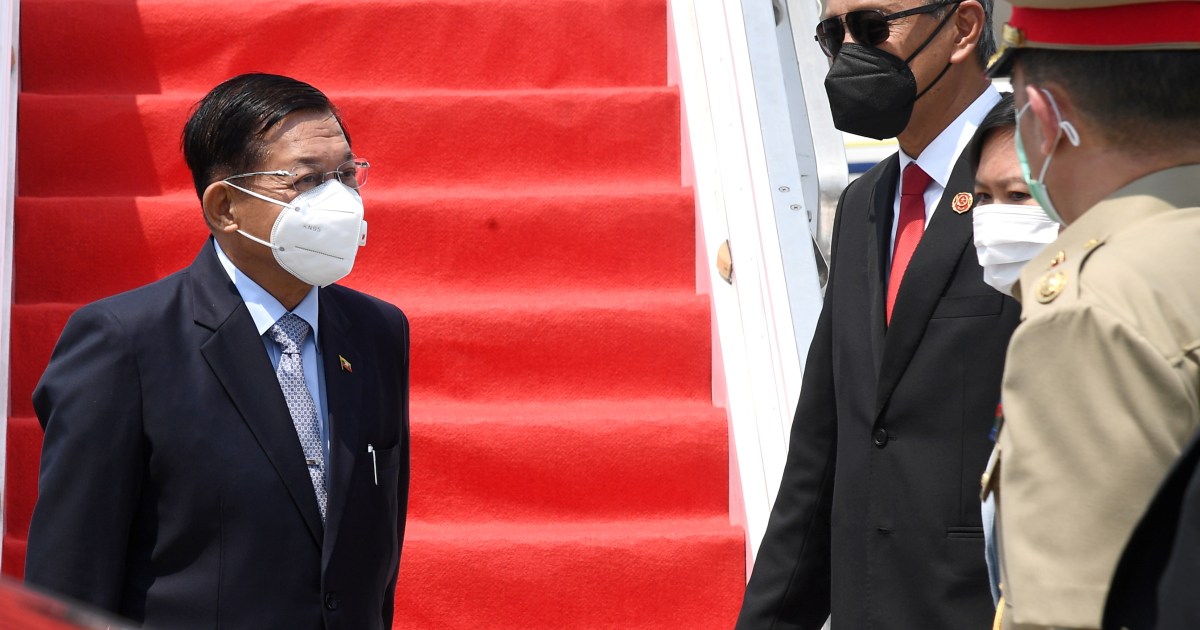 The gathering of ASEAN leaders in Jakarta is the first coordinated international effort to ease the crisis in Myanmar.

Southeast Asian leaders have met Myanmar’s top general and coup leader in an emergency summit in Indonesia and are expected to press calls for an end to violence by security forces in which hundreds of protesters have died, as well as the release of Aung San Suu Kyi and other political detainees.

The gathering of leaders of the Association of Southeast Asian Nations (ASEAN) in Jakarta on Saturday is the first coordinated international effort to ease the crisis in Myanmar, an impoverished country that neighbours China, India and Thailand.

Myanmar is part of the 10-nation ASEAN.

With participants attending in person despite the pandemic, Indonesia’s Foreign Minister Retno Marsudi said on Friday that the summit reflected the “deep concern about the situation in Myanmar and ASEAN’s determination to help Myanmar get out of this delicate situation”.

Myanmar’s coup leader Min Aung Hlaing was seen disembarking after arriving on a special flight from Naypyidaw, Myanmar’s capital, according to footage on the official video channel of Indonesia’s presidential palace.

The leaders’ convoy later entered the ASEAN Secretariat in the Indonesian capital, the venue for the meeting.

About two dozen protesters gathered nearby, beating pots and pans and holding signs saying “Democracy for Myanmar” and “We stand against the military coup”.

Several protests were also held in Myanmar’s main cities but there were no immediate reports of violence.

Following the coup, ASEAN, through Brunei, issued a statement that did not expectedly condemn the power grab but urged “the pursuance of dialogue, reconciliation and the return to normalcy in accordance with the will and interests of the people of Myanmar”.

Amid Western pressure, however, the regional group has struggled to take a more forceful position on issues but has kept to its non-confrontational approach.

All ASEAN states agreed to meet Min Aung Hlaing but would not address him as Myanmar’s head of state in the summit, according to Indonesia’s Foreign Minister Retno Marsudi.

Diplomats and government officials, who asked not to be named, told Reuters news agency that many ASEAN leaders want a commitment from Min Aung Hlaing to restrain his security forces, who monitors say have killed 745 people since a mass civil disobedience movement emerged to challenge his February 1 coup against the elected government of Aung San Suu Kyi.

“This is what Myanmar must avoid: geographical, political, social and national disintegration into warring ethnic parts,” said Philippines Foreign Secretary Teddy Locsin on Twitter. “Myanmar on its own must find peace again.”

Min Aung Hlaing, on his first foreign trip since the coup, will address the summit later on Saturday along with each of the participants before more informal discussions begin, said three sources familiar with procedures.

The summit will be held in a “retreat” format, with leaders sitting in a circle and only one or two officials assisting each one, said Usana Berananda, a Thai foreign ministry official.

ASEAN officials and diplomats have also worked on an initiative to send a humanitarian aid mission to Myanmar and appoint an envoy to encourage dialogue between the military rulers and the overthrown MPs and armed ethnic groups who have formed an opposition National Unity Government (NUG).