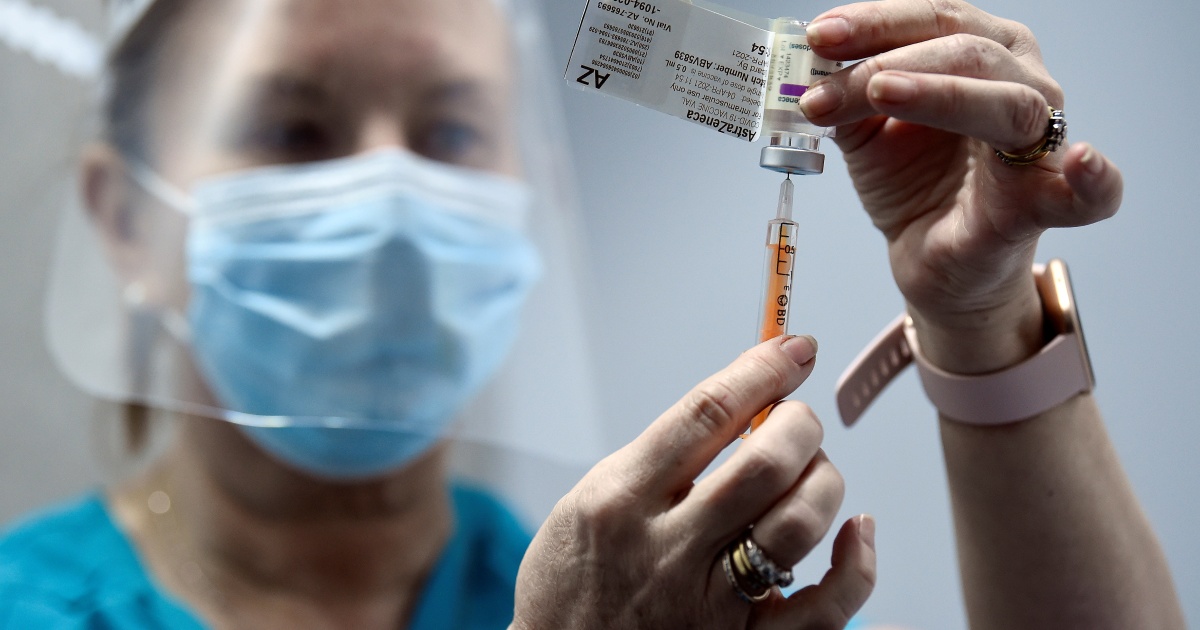 While the EMA says ‘possible link’ found between the jab and ‘unusual’ blood clots, the UK offers young people alternative shot due to risks.

The embattled AstraZeneca COVID-19 vaccine came under further pressure on Wednesday, as the European Union’s medicines regulator found a possible link between the shot and rare cases of blood clots, while the United Kingdom announced it would offer young people an alternative jab due to such risks.

The European Medicines Agency’s (EMA) widely anticipated verdict on Wednesday followed a review of dozens of reports of an extremely rare clot in the brain, known as cerebral venous sinus thrombosis (CVST), among recipients of the jab.

The regulator said as of Sunday, it had received reports of 169 cases of CVST from the 34 million doses of the shot administered in the European Economic Area.

It concluded that unusual blood clots with low blood platelets should be listed as very rare side effects of the vaccine, but recommended that vaccinations continue in adults, reiterating its stance that the benefits of the shot outweigh any risks.

The coronavirus pandemic has hit Europe hard, with many parts of the continent now in the grips of a deadly third wave of infections and the EU struggling to turn around a sluggish initial rollout of vaccines.

“EMA is reminding healthcare professionals and people receiving the vaccine to remain aware of the possibility of very rare cases of blood clots combined with low levels of blood platelets occurring within two weeks of vaccination,” the body said in a statement.

“So far, most of the cases reported have occurred in women under 60 years of age within two weeks of vaccination. Based on the currently available evidence, specific risk factors have not been confirmed.”

EMA placed no new age restrictions on using the vaccine in people aged 18 and above, as some countries have done.

In a separate development on Wednesday, the UK government’s vaccine advisory group recommended that people aged between 18 and 29 be offered an alternative vaccine to the AstraZeneca shot where available.

The move came after the UK’s independent Medicines and Healthcare Regulatory Agency concluded its own review into possible links between the vaccine and reported blood clots.

June Raine, the agency’s head, said that 79 cases of unusual blood clots had been reported in the UK as of the end of March and 19 people had died. More than 20 million doses of the AstraZeneca shot have been given out nationwide as part of the UK’s rapid mass inoculation campaign.

The regulator said the cases did not amount to proof the AstraZeneca shot had caused the blood clots but added the link was becoming firmer.

“It is a reasonably plausible link but there needs to be much more work of the scientific understanding of this new constellation of symptoms to give us the proof that you would expect and that work will go on at pace,” Raine said.

Al Jazeera’s Natacha Butler, reporting from Paris, said Wednesday’s verdicts made clear that “COVID-19 is far more of a risk to the average person” than receiving the AstraZeneca vaccine.

She added, however, that public opinion of the shot had been “battered” amid the blood clot fears, with potential implications for uptake of the jab.

“Those are the sort of problems that European governments will face now as they try to get the message across that this vaccine is safe and its benefits outweigh any risks,” she said.

“So much damage has been done by the negative publicity and the conflicting information about the AstraZeneca vaccine over the past few weeks and months.”

The AstraZeneca vaccine is critical to Europe’s immunisation campaign and is a pillar of the United Nations-backed programme known as COVAX, which aims to get vaccines to some of the world’s poorest countries.

It is cheaper and easier to use than rival offerings from Pfizer-BioNTech and Moderna and has been endorsed for use in more than 50 countries.

The World Health Organization has given its backing to the shot and, like the EMA, has repeatedly said its benefits outweigh the potential risks of side effects.