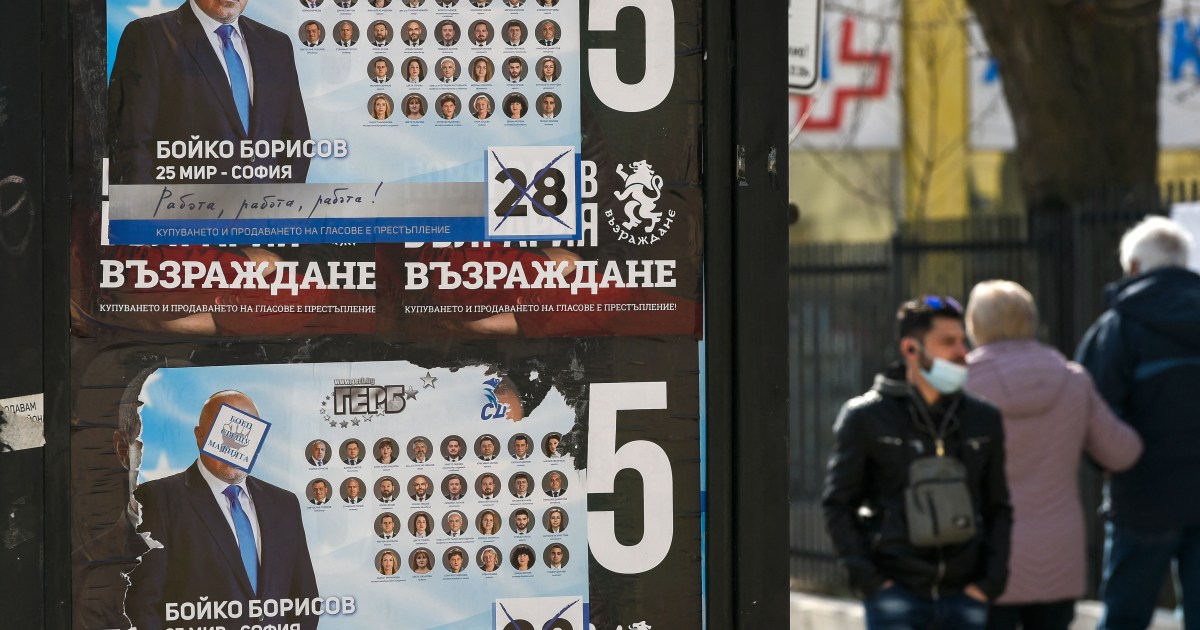 Sofia, Bulgaria – With days until Sunday’s parliamentary elections, Bulgaria on Wednesday registered 5,176 daily COVID-19 cases – a record since the start of the pandemic.

Despite high infection rates and a strained healthcare system, the Bulgarian government has decided to go forward with the vote.

But with a growing number of people in hospital and home quarantine, questions have emerged about how they will be able to vote.

As a result, many of the 120,000 people under quarantine and the nearly 10,000 in hospital may be unable to cast their vote.

The nearly one million Bulgarians living abroad with the right to vote will also likely be affected due to lockdown measures in the countries they live in and the absence of an option to vote by mail or electronically.

Fear of getting infected will also discourage some voters from turning up at the polling stations.

According to observers, these factors could significantly lower the turnout.

“A normal turnout at parliamentary elections, if we look at the data from the past few years, is around 42-43 percent. I won’t be surprised if [this year] it is under 40 percent [or] as low as 35 percent,” said Petar Cholakov, associate professor of sociology at the Institute for the Study of Societies and Knowledge at the Bulgarian Academy of Sciences.

However, analysts say low turnout, vote fragmentation and partisan politics may make the formation of a new government quite difficult.

Amid warnings from health officials that the healthcare system was “on the verge of collapse”, the Bulgarian government imposed a 10-day lockdown in March to try to control the spread of the virus. Ahead of the elections, high infection rates, however, have persisted.

Even so, earlier this week, the government eased lockdown measures, allowing restaurants, cafes, gyms, spas, galleries, cinemas, museums and other public spaces to reopen with some capacity restrictions on April 1.

But according to Cholakov, the criticism GERB has faced over its handling of the COVID-19 response will not necessarily affect its electoral performance.

In fact, the pandemic may work in its favour, as lower turnout would allow parties with a core electorate and younger supporters – like GERB and the Movement for Rights and Liberties (MRL), which is traditionally supported by the Turkish minority – to perform better, Cholakov said.

Government officials have tried to reassure the public, with Minister of Health Kostadin Angelov insisting that “all measures to ensure a safe election” have been taken.

But the opposition has criticised governing coalition’s policies and warned of “chaos in the electoral process” due to the way machine voting was introduced.

This election will be the first in which Bulgarians will have the option to vote through a paper ballot or a voting machine. Critics say the way the electoral process is now set up makes vote counting unnecessarily complicated and may lead to delays in the announcement of results.

The Bulgarian Socialist Party (BSP), which currently is polling second with about 23 percent, may see a significant loss of votes, as its older voter base may be reluctant to go to the polls.

While GERB is able to maintain its electoral lead, its junior partners, the far-right VMRO, Ataka and NFSB, are polling around or below the four-percent threshold for entering parliament.

According to Jana Tsoneva, a Sofia-based sociologist, the far right’s participation in GERB’s coalition government has eroded its support in the electorate.

However, far-right ideas continue to influence the political scene in Bulgaria, pulling all other parties to the right and pushing foreign and domestic policies in a more nationalistic and conservative direction, she said.

This has affected relations with neighbouring countries, especially North Macedonia.

“The Bulgarian government’s entire foreign policy [towards North Macedonia] has become a hostage to the Macedonian obsessions of a far-right junior coalition partner,” Tsoneva said.

In November 2020, Bulgaria blocked North Macedonia’s accession negotiations with the European Union, drawing the ire of the Macedonian government and public.

VMRO has made the “Macedonian question” a central part of its electoral platform.

Earlier this week, the deputy head of VMRO Angel Dzhambazki released an election campaign video in which he suggested North Macedonia is Bulgarian territory, which provoked a sharp reaction in Skopje.

The far-right’s loss of electoral support has coincided with the rise of two new populist formations – There Are Such People, led by popular talk show host Slavi Trifonov, which is polling at 11-14 percent and Stand Up! Thugs Out! headed by Maya Manolova, former ombudswoman and BSP member, which is polling at 5-6 percent.

According to Sofia-based analyst Asen Genov, the rise of these new parties reflects the tendency of part of the Bulgarian electorate to seek out political “saviours”. They have gained popularity despite their lack of a clear political platform.

“[Bulgarian voters] are always waiting for the next saviour. We had this with the tsar, then we had it with Borisov,” Genov said, referring to Tsar Simeon II, the son of Bulgaria’s last monarch before the communist era, who became prime minister in 2001. “The naïve Bulgarian voters will now vote for a new messiah.”

The entry of the new populist parties and a highly fragmented vote may complicate government formation after the elections.

There Are Such People, Stand Up! Thugs Out! and the centre-right Democratic Bulgaria have said that they will not join a GERB-led coalition after supporting last year’s anti-government protests. BSP has also traditionally refused to consider a partnership with GERB.

“If all parties that make it into parliament keep their campaign promises not to enter into coalition with certain political forces, then we won’t have a government after these elections. This means we’ll have early elections,” Genov said, adding that they may be scheduled for the same date with the presidential vote due in November.

Except for ruling out a coalition with BSP, GERB has remained open to partnering with others.

According to Cholakov, even if the composition of the next parliament is highly fragmented, there is still a chance that Borissov will pull off a new government, which would be his fourth since 2009.

“Borissov is a master of the divide-and-rule approach, which will likely be deployed in the next parliament to cannibalise Triffonov’s There Are Such People [in GERB’s favour],” he said.

Cholakov also pointed out that the persistent fragmentation of the opposition, the lack of party discipline and cohesion continue to play into Borissov’s hands, who remains in power, despite decreasing support for his party.