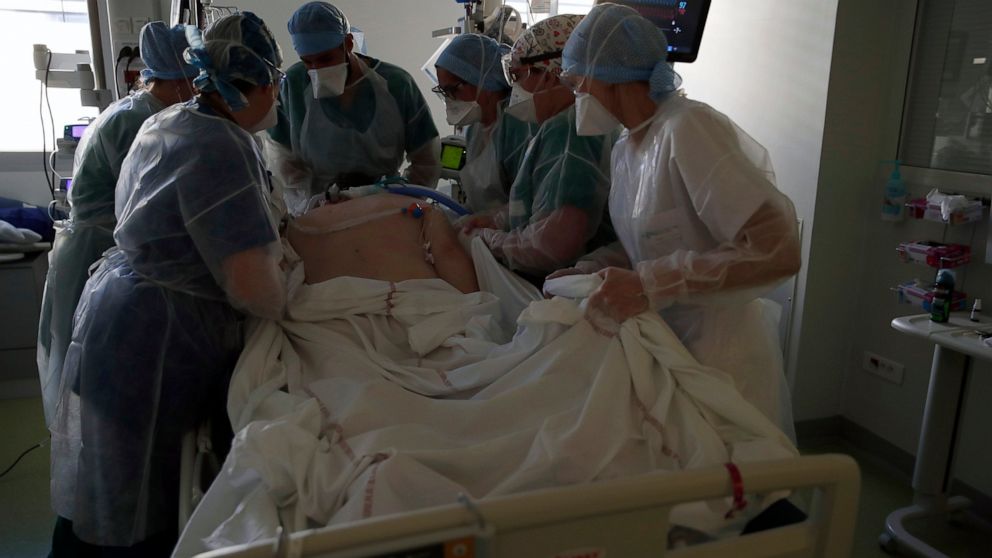 AMIENS, France — As France battles a new virus surge that many believe was avoidable, intensive care nurse Stephanie Sannier manages her stress and sorrow by climbing into her car after a 12-hour shift, blasting music and singing as loud as she can.

People with COVID-19 occupy all the beds in her ICU ward in President Emmanuel Macron’s hometown hospital in the medieval northern city of Amiens. Three have died in the past three days. The vast medical complex is turning away critically ill patients from smaller towns nearby for lack of space.

Yet even though France is now Europe’s latest virus danger zone, Macron has resisted calls for dramatic action. He decided Wednesday to stick broadly to his strategy, a “third way” between freedom and lockdown meant to keep both infections and a restless populace under control until mass vaccinations take over.

“We feel this wave coming very strongly,” said Romain Beal, a blood oxygen specialist at the Amiens hospital. “We had families where we had the mother and her son die at the same time in two different ICU rooms here. It’s unbearable.”

The hospital’s doctors watched as the variant ravaging Britain jumped the Channel and forged south across France. Just as in Britain, the variant is now driving ever-younger, ever-healthier patients into French emergency rooms and ICUs. Amiens medics did their best to prepare, bringing in reinforcements and setting up a temporary ICU in a pediatric wing.

French scientists’ projections — including from the government’s own virus advisory body — predicted trouble ahead. Charts from national research institute Inserm in January and again in February forecast climbing virus hospitalization rates in March or April. Worried doctors urged preventative measures beyond those that were already in place — a 6 p.m. nationwide curfew and the closure of all restaurants and many businesses.

Week after week, the government refused to impose a new lockdown, citing France’s stable infection and hospitalization rates and hoping that they would stay that way. Ministers stressed the importance of keeping the economy afloat and protecting the mental health of a populace worn down by a year of uncertainty. A relieved public granted Macron a boost in the polls.

But the virus wasn’t finished. The nationwide infection rate has now doubled over the past three weeks, and Paris hospitals are bracing for what could be their worst battle yet, with ICU overcrowding forecast to surpass what happened when the pandemic first crashed over Europe.

While other European countries imposed their third lockdowns in recent months, Macron said that by refusing to do so in France, “we gained precious days of liberty and weeks of schooling for our children, and we allowed hundreds of thousands of workers to keep their heads above water.”

At the same time, France has lost another 30,000 lives to the virus this year. It has also reported more virus infections overall than any country in Europe, and it has one of the world’s highest death tolls — 95,640 lives lost.

Macron’s refusal to order a lockdown has frustrated people like Sarah Amhah, visiting her 67-year-old mother in the Amiens ICU.

“They’ve managed this badly all along,” she said, recalling government missteps a year ago around masks and tests and decrying logistical challenges around getting a vaccine for elderly relatives. While she’s still proud of France’s world-renowned health care system, she’s ashamed of her government. “How can we trust them?”

Pollsters note growing public frustration in recent days with the government’s hesitancy to crack down, and the potential impact of Macron’s current decisions on next year’s presidential campaign landscape.

Macron last week defended his decision not to confine the country Jan. 29, a moment epidemiologists say could have been a turning point in France’s battle to prevent surge No. 3. “There won’t be a mea culpa from me. I don’t have remorse and won’t acknowledge failure,” he said.

Instead of emulating European neighbors whose strategies are bringing infections down — like Britain, which is now starting to open up after a firm three-month lockdown — French government officials dodge questions about the growing death toll by comparing their country to places where the situation is even worse.

At the Amiens ICU, things are already bad enough.

“We have the impression that the population is doing the opposite of what they should be doing,” nurse Sannier said, before heading off on her rounds. “And we have the feeling we are working for nothing.”

Intern Oussama Nanai acknowledged that the drumbeat of grim virus numbers has left many people feeling numb, and he urged everyone to visit an ICU to put a human face to the figures.

But sometimes their work pays off. “Two people who were in the most serious condition for 60 days left on their own two feet, and they sent us photos,” he said. “That boosts our morale and makes us realize that what we are doing is useful.”