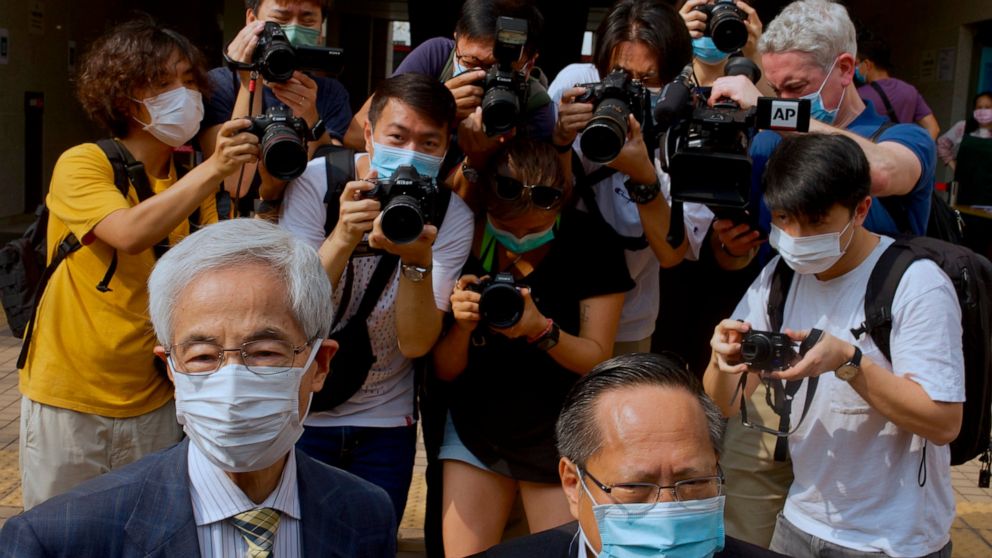 HONG KONG — Seven Hong Kong pro-democracy advocates were convicted Thursday on charges of organizing and participating in an unlawful assembly during massive anti-government protests in 2019 that triggered a crackdown on dissent.

The seven include media tycoon and founder of the Apple Daily tabloid Jimmy Lai, as well as 82-year-old Martin Lee, a veteran of the city’s democracy movement. Lai had already been held without bail on other charges related to his pro-democracy activities.

They were convicted for their involvement in a protest held on Aug. 18, 2019. Organizers said that 1.7 million people marched that day in opposition to a proposed bill that would have allowed suspects to be extradited to mainland China for trial.

The activists, apart from those who have been remanded in custody on other charges, were granted bail on condition they do not leave Hong Kong and must hand in all their travel documents.

They will next appear in court on April 16, where mitigation pleas will be heard before sentences are handed down. Taking part in an unlawful assembly or a riot in Hong Kong can result in a maximum sentence of up to 10 years imprisonment for serious offenses.

Ahead of the trial, supporters and some of the defendants gathered outside the court, shouting “Oppose political persecution” and “Five demands, not one less,” in reference to demands by democracy supporters that include amnesty for those arrested in the protests as well as universal suffrage in the semi-autonomous territory.

“So on this day, in a very difficult situation in Hong Kong, political retaliation is on us,” Lee Cheuk-yan, one of the defendants, said ahead of the court session.

Hong Kong was rocked by months of protests in the second half of 2019, sparked by the extradition bill. The bill was eventually withdrawn, but the protests expanded to include full democracy and other demands and at times descended into violence between demonstrators and police.

In the aftermath of the protests, Beijing took a tough stance on dissent, imposing a sweeping national security law on Hong Kong and approving electoral reforms that would reduce public participation in elections and exclude critics from running for the city’s legislature.

China had pledged to allow the city to retain freedoms not permitted elsewhere in the country for 50 years when it took Hong Kong back from Britain in 1997, but its recent steps are seen as a betrayal.