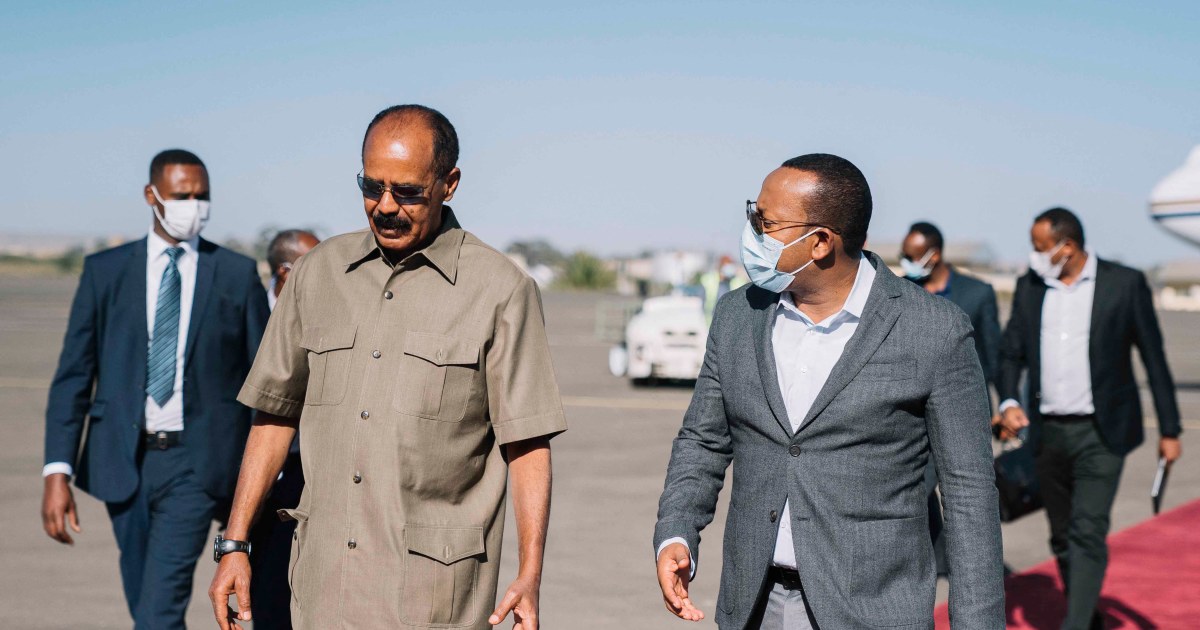 On March 22, 2021, the European Union sanctioned Eritrea’s National Security Agency with an asset freeze and travel ban, alleging that the agency was “responsible for serious human rights violations in Eritrea, in particular arbitrary arrests, extrajudicial killings, enforced disappearances of persons and torture committed by its agents.”

In response, the Eritrean Ministry of Foreign Affairs issued a statement dismissing the sanctions as “baseless and offensive”. In the statement, the ministry did not address any of the allegations relating to the agency’s actions within Eritrea but instead focused on what it perceives as the EU’s support for the Tigray People’s Liberation Front (TPLF) – the governing party of Ethiopia’s Tigray region which is currently engaged in a bloody conflict with the Ethiopian government.

“[T]he EU has been doggedly working to save and bring back to power the defunct TPLF clique, and to undermine the region’s own efforts to address challenges and advance comprehensive and durable cooperation,” the Eritrean foreign ministry said. “The EU has particularly targeted Eritrea in a futile attempt to drive a wedge between Eritrea and Ethiopia.”

The statement made obvious the Eritrean regime’s growing concerns about the international community’s united condemnation of the human rights violations committed by its armed forces in Ethiopia since the beginning of the ongoing Tigray conflict.

Indeed, since it became obvious that Eritrean troops have crossed the border to support the Ethiopian government’s offensive against the TPLF, the international community has been open in its criticism of the Eritrean government.

US Secretary of State Anthony Blinken, for example, recently denounced the “acts of ethnic cleansing” being committed in Tigray and called for the immediate departure of Eritrean troops from the embattled region.

But Eritrean President Isaias Afwerki, who has been governing Eritrea with an iron fist since its independence in 1993, is no stranger to international condemnation and isolation. So why is the Eritrean regime so concerned about the reactions to its actions in Tigray? Could the conflict in Ethiopia, and its domestic and international consequences, finally bring an end to Afwerki’s despotic rule?

The peace deal Afwerki signed with Ethiopian Prime Minister Abiy Ahmed in July 2018 not only raised hopes for sustainable peace in the region but also averted the collapse of the Eritrean regime, which was seen as a pariah state due to its myriad human rights abuses and aggressions.

In the immediate aftermath of the peace deal, with some help from its regional allies Saudi Arabia and the United Arab Emirates, Afwerki managed to get the UN sanctions on his government removed, and reemerged as a key regional player.

But rather than using his newfound legitimacy as an opportunity to introduce reforms and help his country rejoin the international community, Afwerki chose to focus on exacting revenge on the TPLF, which had been ruling Ethiopia throughout its decades-long conflict with Eritrea.

When the long-simmering tensions between the TPLF and Abiy’s government boiled over, Afwerki joined forces with the Ethiopian government to ensure the complete annihilation of the group.

Initially, the Eritrean and Ethiopian governments categorically denied Eritrea’s involvement in the relentless and violent military assault on Tigray. Soon enough, however, the truth became impossible to conceal. Citizens of Tigray started to talk on social media about the abuses, looting, killings and rapes committed across Tigray not only by Ethiopia’s federal forces and troops from Amhara but also by Eritrean soldiers. Moreover, international human rights organisations, such as Amnesty International, published scathing reports on the atrocities committed by Eritrean forces in the region.

Abiy declared victory against the TPLF on November 28, but the war, and the atrocities against the civilian population, continued in full force. As the international community inevitably turned its attention to the region, the Nobel Peace Prize laureate found himself under increased pressure to provide an explanation for the ongoing violence.

On March 23, the Ethiopian prime minister officially acknowledged the presence of Eritrean forces in Tigray. In an address to Parliament, he expressed his gratitude to Eritrea for helping Ethiopian soldiers who fled to the neighbouring country after being attacked by TPLF forces, but added that he would not allow “any force to cross borders and attack our people”.

The prime minister added that he had received an assurance from Eritrea that it will withdraw its forces once the federal government of Ethiopia has full control over Tigray, which it currently does not have.

On March 26, after visiting Asmara and meeting with Afwerki, Abiy tweeted that Eritrea agreed to withdraw its troops. Abiy’s acknowledgement of the presence of Eritrean troops in Tigray was seen by many as an attempt by the Ethiopian leader to shield himself from blame and scapegoat Eritrea for the ongoing human rights abuses in the region.

The Ethiopian state’s about-turn on the issue likely angered and concerned Afwerki, who would have preferred to keep his country’s involvement in the conflict as an open secret.

Now that Eritrean military presence in Ethiopia is out in the open and the Ethiopian government is pressing for withdrawal, the Eritrean president appears to be in an increasingly difficult situation.

He could still resist pressure from Addis Ababa and keep Eritrean troops in Tigray. But remaining in a hostile environment for too long would have a massive human cost not only for the local population but also for the invading troops. Moreover, the troops themselves could turn against the political leadership.

Sources from the conflict area have recently told me that discontent is already simmering within the Eritrean forces, who do not see a safe exit in the near future. A refusal by the Eritrean regime to withdraw from Ethiopia could also lead to further crippling sanctions from the international community.

Withdrawing, however, also comes with great risk and potential cost. If Eritrean forces leave Tigray prematurely, they could enter into a new protracted cross-border conflict with the TPLF, which would force them to remain stationed at the border indefinitely. This could result in an eruption of public anger against the regime, as the Eritrean people are already tired of war and forced military service and had been promised a better future after the country’s peace deal with Ethiopia.

Meanwhile, the recently introduced EU sanctions, and harsh comments coming from the US and other nations, signal that the international community has had enough of the Afwerki regime’s crimes in Eritrea and beyond.

Western powers are scrambling to get the situation in Tigray under control and bring an end to this humanitarian catastrophe. The Biden administration has sent Senator Chris Coons to Ethiopia to convey its growing concerns. Washington is also considering appointing a special envoy to oversee its interests and policy in the Horn of Africa. As they attempt to end the violence, the US and its allies are faced with difficult decisions about their future relations with Ethiopia’s prime minister.

Looking for a scapegoat

Since taking power, Abiy has been a valuable ally to the West. He has received much praise for his peace-building efforts and successful mediations between warring nations in the region. He also introduced life-changing reforms in Ethiopia and transformed the country into a leading regional player. Will the Western powers risk losing their partnership with the Ethiopian prime minister by putting the blame for the atrocities committed in Tigray entirely on him and his government?

With Ethiopia already acknowledging that Eritrean troops attacked local civilians in Tigray, it is likely that when the conflict is over and the international community is looking for someone to blame, Afwerki will be the obvious scapegoat.

There are other factors that weaken Afwerki’s hand in this blame game. Both the TPLF and the Ethiopian government have strong lobbying operations in the US, and while the narratives they have been pushing are not fully known, it is certain that they are not friendly to Eritrea.

Furthermore, the UAE’s recent withdrawal from Eritrea’s Assab Port signals that Asmara may not be able the enjoy the backing of regional powers like it did in the past few years. The UAE’s drones reportedly have played a crucial role in dismantling the TPLF’s heavy artillery. It is not likely that the UAE will come to Afwerki’s rescue at the cost of its coveted Western alliances. Left isolated, a weakened Afwerki would be vulnerable prey.

The Afwerki regime is also likely to face a new wave of domestic dissent in the coming days. While the Eritrean president has been singularly focused on the war in Tigray, conditions have been worsening by the day for citizens inside Eritrea. Eritrean families who sent their loved ones to the war in Ethiopia have been kept completely in the dark and do not know their fates. The magnitude of losses will be revealed only after Eritrea begins pulling out of Tigray, which would likely result in significant public anger and anti-regime sentiment.

For many years, Eritreans have been led to believe that better days are coming. The war in Tigray proved that under Afwerki’s leadership, regardless of any peace deals and diplomatic openings, their future will be shaped by atrocities, war crimes and endless suffering. With nothing left to lose, or hope for, they are more likely than ever before to rise against the regime.

Only time will tell whether Afwerki will be able to weather this storm and somehow hold on to power. But whatever happens in the coming days, Eritrea will have to carry the weight of the devastation its military has caused in Tigray.

The views expressed here are the author’s own and do not necessarily reflect Al Jazeera’s editorial stance.