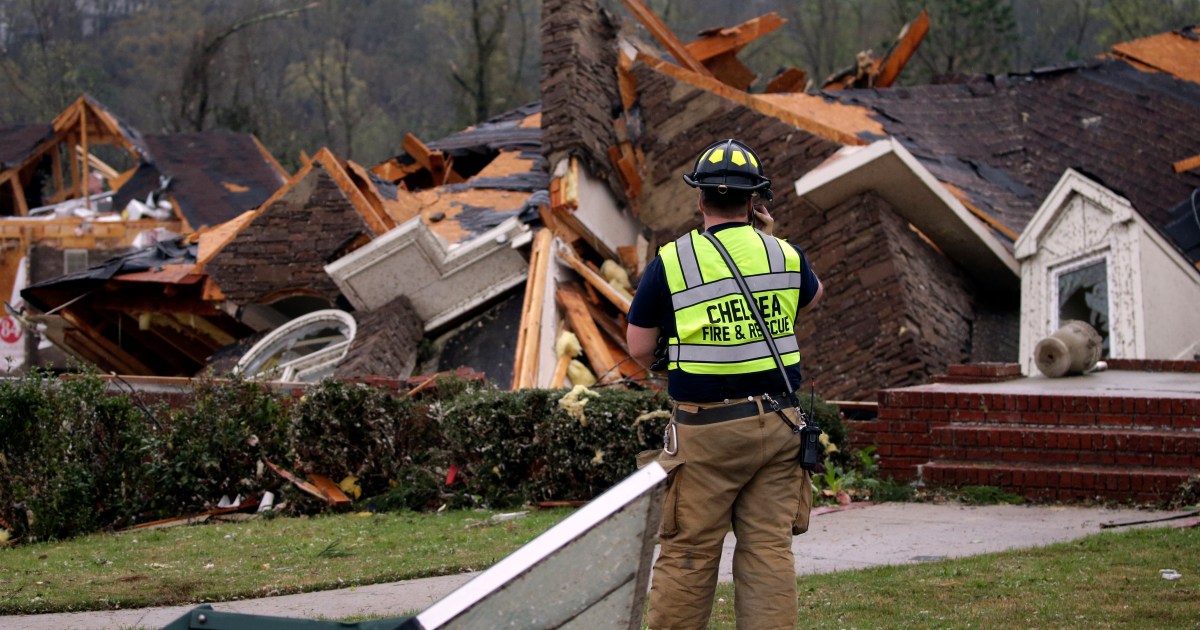 A series of tornadoes, part of so-called “supercell” storms, tore across Alabama and moved into Georgia early on Friday, leaving at least five people dead amid ruins of wrecked homes, splintered trees and crumpled businesses.

Authorities said one tornado travelled roughly 160km (100 miles) across Alabama on Thursday, leaving a long path of damage. Meanwhile, the National Weather Service for Atlanta said a “dangerous, fast-moving” tornado ripped through some of the metro’s southern suburbs just after midnight.

With power knocked out to tens of thousands and people now tasked with clearing away the debris and rebuilding, the violent weather that swept parts of Alabama and the region marked the most dreaded part of springtime in the Deep South: tornado season.

While Alabama appeared to bear the brunt of Thursday’s tornado outbreak, forecasters warned of dangerous thunderstorms, flash floods and possible tornadoes from eastern Mississippi into western Georgia, and northward into Tennessee and Kentucky. Also, flash flood warnings and watches extended to the western Carolinas during the night hours.

The deaths were confirmed in Calhoun County, in east Alabama, where one of multiple twisters sprang from a supercell of storms that later moved into Georgia, said John De Block, a meteorologist with the National Weather Service in Birmingham.

Calhoun County Sheriff Matthew Wade said the twister cut a diagonal path across the county, striking mostly rural areas – something that likely kept the death toll from being higher.

“Five people lost their lives and for those families, it will never be the same,” Wade said at an evening briefing. “Our hearts, our thoughts and our prayers go to the families, and we are going to do our best to let them know we love them.”

In the city of Pelham, James Dunaway said he initially ignored the tornado warning when it came over his phone. But then he heard the twister approaching, left the upstairs bedroom where he had been watching television and entered a hallway –  just before the storm blew off the roof and sides of his house. His bedroom was left fully exposed.

Devastating images are coming in from tornado damage in the Birmingham, AL area. This is from Lake Purdy, AL of homes totaled by the storm #ALwx #tornado pic.twitter.com/mIs1MClZJI

Pelham authorities posted video of large trees blocking roads and utility poles leaning menacingly over debris-littered streets. Firefighters outside a flattened home in the Eagle Point subdivision, also in Shelby County, said the family that lived there made it out alive. Nearby homes were roofless or missing their second storeys.

In the western city of Centreville, south of Tuscaloosa, Cindy Smitherman and her family and neighbours huddled in their underground storm pit as a twister passed over their home.

A tree fell on the shelter door, trapping the eight inside for about 20 minutes until someone came with a chainsaw to help free them, said Smitherman, 62. The twister downed trees, overturned cars and destroyed a workshop on the property.

Centreville Mayor Mike Oakley told ABC 33/40 news that a local airport was hit. “We have airplanes torn apart like toys. We’ve got homes along here that are totally destroyed, trees down, power lines down. It’s pretty devastating.”

As many as eight tornadoes might have hit Alabama on Thursday, De Block said. He said investigation teams will review eight suspected tornado tracks, and the final twister number will be dependent on whether any of those tracks can be connected.

My literal back yard @spann https://t.co/vOGEyL12Ol

Meanwhile, First Lady Jill Biden postponed a trip to Birmingham and Jasper, Alabama, that she had planned for Friday because of the severe weather, her office said in a news release.

“Thinking of everyone in Alabama and all of those impacted by the severe weather across the South tonight. My prayers are with the grieving families. Please stay safe,” Biden wrote on Twitter.

Earlier, Alabama Governor Kay Ivey issued an emergency declaration for 46 counties, and officials opened shelters in and around Birmingham.

In addition to deaths in Alabama, Mississippi had a storm-related death on Wednesday. Ester Jarrell, 62, died in that state’s Wilkinson County.