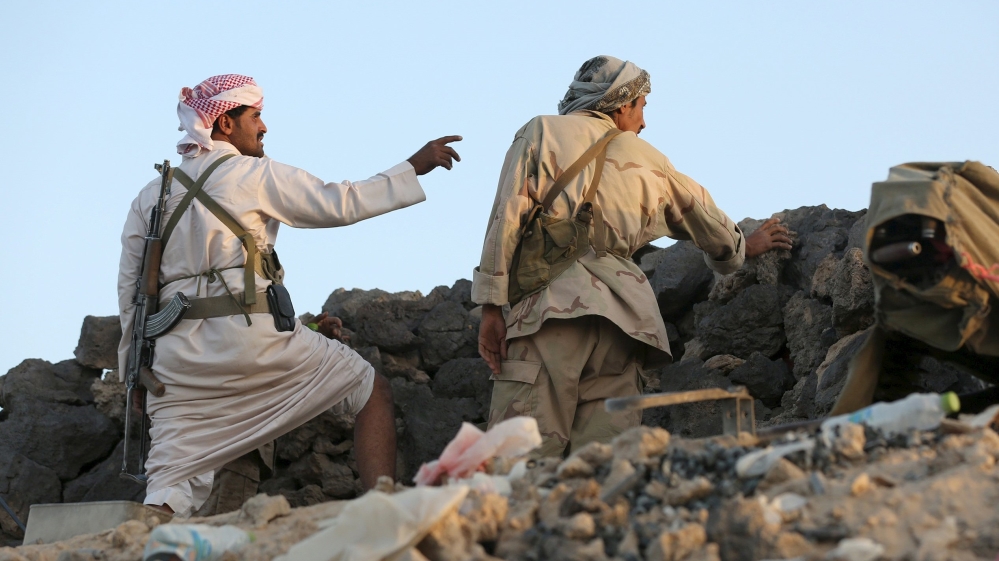 On the front lines to the west of Marib, the last major city under complete government control in Yemen’s north, the battles are still fierce.

The Houthi rebels, despite six years of Saudi-led military intervention to counter their attempted takeover of the Yemeni state, are on the offensive.

If Marib falls, it would highlight the Saudis’ failure to overcome an armed group that was seen as a ragtag pro-Iranian militia at the start of the war. It would also prove disastrous for a Yemeni government that has struggled to stamp its authority even on territory nominally under its control as it faces enemies from within the anti-Houthi camp.

Yet men like Adel Al-Qardaie are still fighting for the Yemeni government in Marib. The soldier has participated on the front lines against the Houthis since 2015 – and sees it as his patriotic duty.

“Marib will not fall because of the two million people who fled here from across the country, as well as Marib’s original inhabitants,” Al-Qardaie told Al Jazeera in a break from fighting. “They will not allow it to fall. Marib is the last haven of those who have been oppressed by the Houthis. They will defend Marib until the last person.”

Al-Qardaie said the situation at the front is constantly changing. The Houthis have been sending reinforcements to the governorate since their latest offensive in the area began at the start of February. However, despite early successes, they got no further than about 30km (19 miles) west of Marib city and government defences have held.

After the Houthis overran much of Yemen, the Saudi-led coalition launched air strikes in the early hours of March 26, 2015.

With the Houthis again on the attack six years later, Saudi Arabia unilaterally announced a new ceasefire proposal on March 22, which would see direct UN-backed political negotiations between the Yemeni government and the Houthis for the first time since late 2018. Yet, Houthi leaders quickly rejected the proposal, framing it as not serious, and the Saudis hit Houthi-held capital Sanaa with air raids the following night.

“Saudi Arabia must declare an end to the aggression and lift the blockade completely, but putting forward ideas that have been discussed for over a year is nothing new,” Houthi spokesman Mohammed Abdulsalam said.

“The countries of the aggression [the Saudi-led coalition] must stop all military operations against Yemen, remove their forces, and end the siege unconditionally,” in return for an end to Houthi cross-border attacks on Saudi Arabia, said Mohammed Al-Bukhaiti, another prominent Houthi, on Twitter.

The comments seemed to reflect Houthi confidence in their current position. The new Biden administration in the US has removed the Houthis from its foreign terrorist organisation list and indicated it would not be willing to give Saudi Arabia the free pass its predecessor did. Since then, the Houthis have escalated their military actions on the ground in Yemen and stepped up attacks on Saudi Arabia, targeting airports and oil installations.

“The Houthis have taken the initiative militarily, no one else has,” said Maged Al-Madhaji, executive director of the Sana’a Center for Strategic Studies. “They decide where the battles will take place, and they’re stronger. They didn’t accept a deal when they were weaker militarily, so why would they accept one when they’re stronger and the military situation is in their favour?”

While the Houthis do have the upper hand, Yemeni government forces have attempted offensives of their own in recent weeks, in the central governorate of Taiz, as well as in Hajjah, in Yemen’s northeast. The offensives have been relatively successful so far, indicating the Houthis may be slightly overstretched.

The reality is while the Houthis are a united and cohesive unit, the anti-Houthi side continues to be divided. In Taiz, United Arab Emirate-backed forces loyal to Tareq Saleh, former President Ali Abdullah Saleh’s nephew, are as wary of Islah, a Muslim Brotherhood-linked political party that dominates the government’s military leadership in Taiz, as they are of the Houthis.

Tensions also continue between supporters of Yemeni President Abd-Rabbu Mansour Hadi and the separatist Southern Transitional Council, despite the inclusion of members of the latter in a unity government in late December.

“There is no chance that the anti-Houthi camp will actually unite in Yemen,” said Al-Madhaji. “The only thing to do is to change the way the Yemeni government is operating. But that means we have to ask the question – what is the status of President Hadi, Vice President Ali Muhsin, and the other leaders, and what have they been doing for the past seven years?”

As the war drags on, Yemeni civilians continue to suffer in what the UN calls the world’s worst humanitarian crisis. The UN estimates the war has caused 233,000 deaths, including 131,000 from indirect causes “such as lack of food, health services and infrastructure”. The war has also devastated the Yemeni economy, driving up food prices, and leaving the country with the second-highest income inequality levels in the world.

“The state of human rights in Yemen is abysmal, and the warring parties continue to cause immense civilian harm,” Kristine Beckerle, legal director of Mwatana for Human Rights, told Al Jazeera. “But at the same time, you have these amazing efforts by Yemenis – women, youth, civil society – to document, advocate and push for a different trajectory for the country.

“They’re calling for accountability and reparations, this many years into the conflict. It’s long past time states listened to these people, rather than the war profiteers with guns.”

And yet, for fighters like Al-Qardaie, the war is an existential battle, and not one they are willing to give up on yet.

“No battles occur without sacrifices,” Al-Qardaie said. “The Houthis attacked our land, our homes, and made our people flee. We’re now in a situation where we’re fighting for our lives. This is about life or death.”