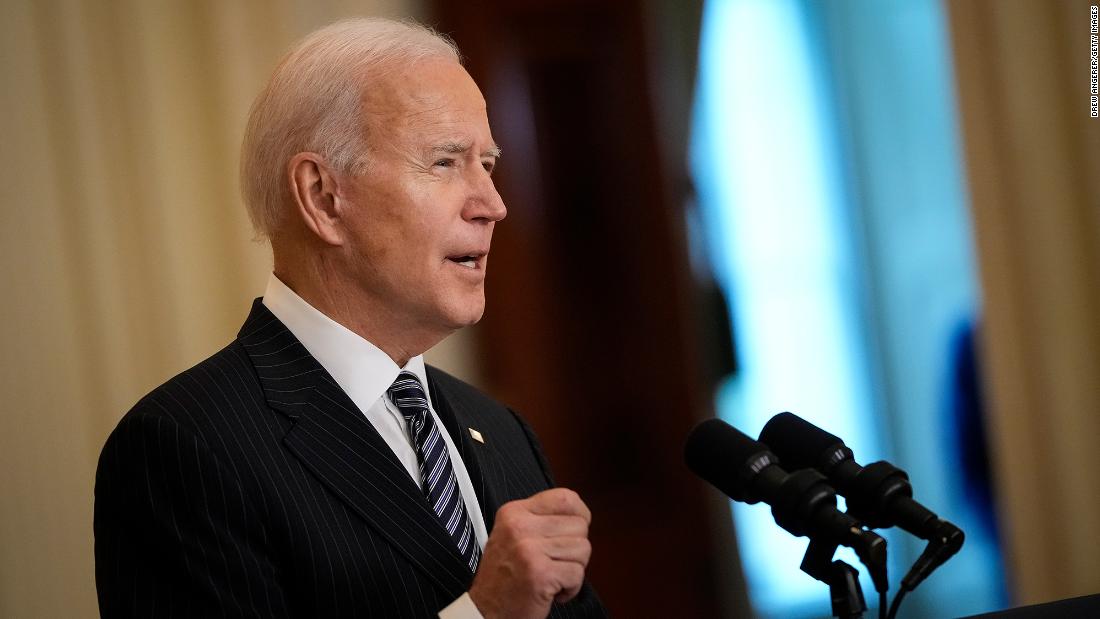 A version of this story appeared in CNN’s What Matters newsletter. To get it in your inbox, sign up for free here.

His first news conference Thursday might be the first time most Americans will see him take questions in the more than two months since he took office. He’ll likely argue he’s done as much or more than most new presidents – and his $1.9 trillion Covid relief bill is a very big deal.

The remarks are scheduled for 1:15 p.m. ET, in the middle of the day, when most people are probably working. Trump usually scheduled things for prime time.

I’ve got a lot of questions for him, although like most people I won’t get to ask them (CNN’s White House reporters will handle that).

So I went around to some smart people at CNN – Tami Luhby, who covers health care; Katie Lobosco, who covers economic policy; Katelyn Polantz, who covers criminal justice; Chris Isidore, who covers the auto and airline industries; Priscilla Alvarez, who covers immigration; and Jennifer Hansler, who covers diplomacy – and asked what’s on their minds.

With their input, what follows is a not very short and still not comprehensive list of what Biden should be asked.

Will you get more ambitious on Covid?

The US easily met your goal of putting 100 million vaccine shots in arms in less than 100 days and you want most Americans to have the ability to get vaccinated by May. What more ambitious goals will you set for the country to achieve with regard to Covid?

How will you make the vaccine distribution more equal?

There is still a clear discrepancy in states and communities – some are doing much better than others at getting Covid vaccine out there. Track them here. What are you going to do starting tomorrow to bring all of the country in line?

How can we convince people to take the vaccines?

The next major problem of vaccines won’t be access, it will be apprehension, particularly among communities of color and, conversely, White conservatives. What approaches will you take to reach these two very different groups? More specifically, will White conservatives listen to you?

What’s next on schools?

Even in places where kids are returning to school, it’s often not a majority of kids who are actually in school. Statistics and polling suggest it is more often White families that are sending their kids back when given the opportunity. Will it be a failure if a year from now there are proportionally more White kids getting in-person education than kids of color?

You’re spending A LOT of money. Trillions and trillions.

You signed a $1.9 trillion Covid relief bill into law. You’re looking at a $3 trillion infrastructure package. That’s $5 trillion in new spending. Why shouldn’t Americans be alarmed at this rate of spending, and how in the heck are we going to pay for all of it? The country was running $1 trillion budget deficits before you took office.

How will you raise taxes?

When will we see your plans to increase taxes on wealthy Americans and corporations?

What’s a win on Covid relief?

Your American Rescue Plan cost $1.9 trillion. Besides reaching full employment next year, how else will you measure its success?

Have you given up on the minimum wage?

One thing dropped from the Covid bill was the $15 federal minimum wage. What’s your strategy for getting a $15 minimum wage passed if you need at least 10 Republican votes. What do you say about the Congressional Budget Office estimate that the higher minimum wage would lead to the loss of 1.4 million jobs?

Will you back electric cars?

Sens. Alex Padilla and Dianne Feinstein have asked you to set a date after which the sale of gasoline-powered cars will be banned. California Gov. Gavin Newsom has already signed an executive order banning the sale of those cars by 2035, and GM says it wants to move to all electric cars by then. Are you ready to endorse such a rule?

What about Tesla and unions?

Your executive order calling for the federal government to buy electric cars and trucks when possible said that one of its goals is to spur “the creation of union jobs in the manufacture of those new vehicles.” But the world’s largest maker of electric vehicles is Tesla, which is nonunion. Does that mean that you don’t believe the government should buy electric vehicles from Tesla?

Too much bailout for airlines?

The US airline industry has received more direct government help than any other sector – $54 billion to at least temporarily prevent layoffs. Was that a fair and good use of that money, or should the money have been spread around other parts of the economy, including other parts of the travel and tourism industry that did not receive that kind of help?

What will you do if the economy overheats?

A growing number of economists – some of them Democrats – are concerned the US government is spending too much money and the economy could overheat. If there are signs the government is overheating, is there a plan to deal with that problem?

When will you end Trump’s tariffs?

Trump’s China tariffs have cost American importers $82 billion so far. Do you plan to lift those tariffs, and if so, when?

What should be done about misinformation online and Trump’s new platform?

There are reports that Trump will start his own social media platform. What should the US government do to regulate such a platform and is it the business of the federal government to regulate fake news online?

You frequently tout that the American Rescue Plan will reduce child poverty by more than half, but several key provisions last only one year. What will you do to make the changes to the child tax credit, earned income tax credit and other measures permanent?

How will you proceed on student loan debt?

You have said you support canceling up to $10,000 in student loans per borrower. Are you willing to take executive action to do so?

Do you back Trump’s prescription drug plan?

You’ve taken some steps to bolster the Affordable Care Act and Medicaid. What will you do to reduce the cost of prescription drugs? Do you support any of the efforts the Trump administration started, including importing drugs from Canada and tying prices here to those in other countries?

Are you ready to expand the Supreme Court?

Voters put you in the White House and gave Democrats control of the Senate last November. But because the Constitution has been interpreted to give justices lifetime appointments, the court has a new conservative majority that could last generations. Do you believe there should be more than nine Supreme Court justices as a way to make the court more responsive to the American people?

What if the new conservative court takes away Obamacare?

What will you do if the Supreme Court overturns the Affordable Care Act? Do you have an alternative plan in the works?

Why not end the filibuster?

There are majorities in Congress right now to pass gun control, voting rights legislation, climate change legislation, immigration revisions and more. Proposals on all of these policies have languished for years, and in some cases decades, because senators insist on a supermajority to pass any legislation. Can you explain to your fellow Democrats why you don’t support ending the filibuster right now?

Are you sidestepping a border crisis?

Your administration has tried very hard not to call the situation at the border a crisis. Many thousands of unaccompanied minors have been apprehended and by sheer numbers, the influx of migrants could eclipse what occurred during the Trump administration. At what point will you agree that this is a crisis?

How did this border situation happen?

What more should have been done early on in your administration to prepare so thousands of children didn’t languish in Customs and Border Protection custody for extended periods? What will you do now that so many kids are at the border?

Do these Democratic senators have a point?

Two US senators, both of them Asian American, threatened to boycott your Cabinet nominees because you haven’t nominated Asian Americans. Do you agree that your Cabinet has a diversity problem? Regardless, what will you do to assuage the concerns of these senators, without whom you may not be able to confirm nominees?

The US has been at war in Afghanistan for 20 years.

The Trump administration agreed to a peace deal that would have US troops out of the country by May 1. Will you stick to that deadline?

Can you work with the Taliban?

Do you believe that the Taliban have upheld their commitments under the 2020 deal with the US?

What are you waiting for?

Your secretary of state reaffirmed at NATO that the US and allies would leave Afghanistan together “when the time is right.” What specifically needs to happen for the time to be right?

What are your views on the insurrection?

Do you believe Trump and others at the January 6 rally incited the crowd to overrun Congress?

Is there evidence of sedition?

A Justice Department prosecutor told “60 Minutes” he personally thinks Capitol rioters should be charged with sedition. Do you agree?

Should presidents get special protection?

Do you believe presidents and their top advisers should be given special protection from congressional and other investigations after they leave office, merely because of the position they held?

How do you measure up to Obama?

Please compare your accomplishments so far to those of former President Barack Obama at this point in his presidency.

How’s life at the White House?

Do White House employees need to steer clear of your dog?