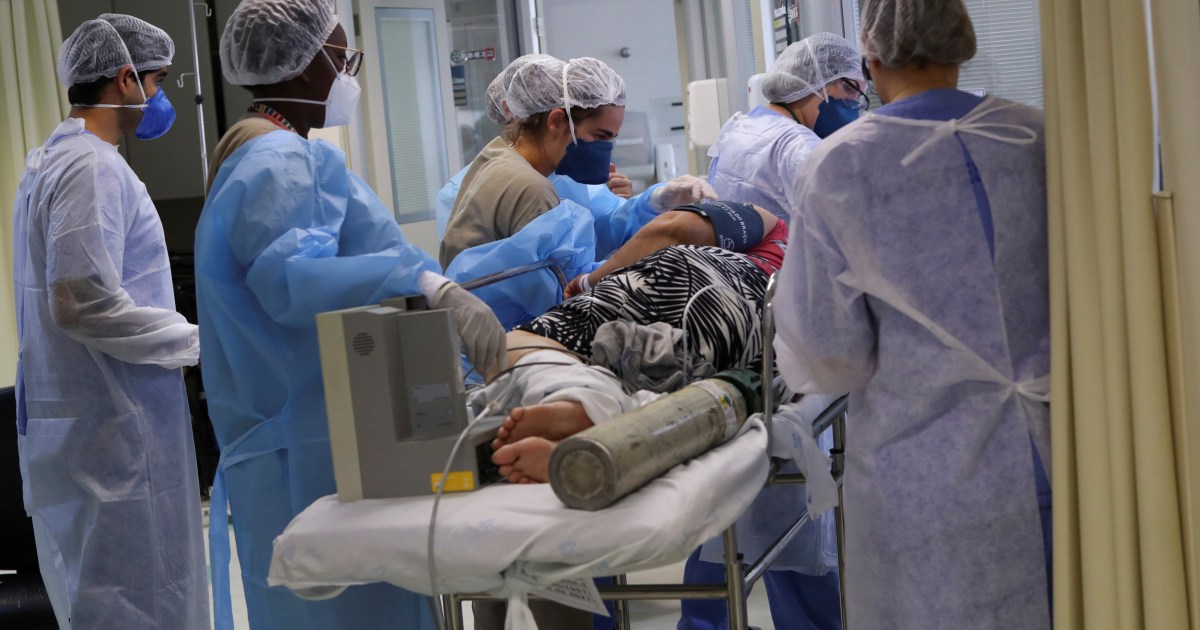 Rio de Janeiro, Brazil – Earlier this year, the jungle city of Manaus sent shockwaves across the globe when hospitals ran out of oxygen with lethal consequences – turning the city into the world’s COVID-19 epicentre.

Two months on, Brazil’s COVID catastrophe has never been worse. Now, with new coronavirus variants and a series of grim records of deaths and infections, there are fears that a lack of oxygen supplies seen in Manaus, the Amazonas state capital, could unfold elsewhere.

Brazil is approaching 300,000 COVID deaths and it set another weekly record last week with 2,255 deaths and 513,408 new cases, according to Johns Hopkins University. Amid this surge, Fiocruz epidemiologist Jesem Orellana told Al Jazeera that a lack of sufficient oxygen, intubation drugs and medical supplies could push Brazil’s hospitals closer to collapse in the coming weeks.

“The signs are very clear. Today, the country is becoming Manaus,” he said.

According to Orellana, the cascade of new infections and patients in critical condition requiring intensive care is draining the country’s oxygen, medicines and equipment resources.

In nearly all of Brazil’s 26 states and its federal district, COVID intensive care units have become so overloaded, with several at 100 percent capacity, that reports have emerged of patients dying on hospital floors in the absence of available beds. Other deaths have been reported because of oxygen shortages due to extremely high demand.

In the city of Campo Bom, in the state of Rio Grande do Sul, six COVID patients died last Friday due to problems with oxygen supplies at Hospital Lauro Reus. Local witnesses described scenes of terror as doctors cried for help when liquid storage tanks emptied for 30 minutes. According to a statement from the hospital, the deaths were due to a failure in the oxygen distribution system, rather than a lack of oxygen.

However, Lannes Osorio, the health secretary of the hospital, informed Al Jazeera that the problem had occurred due to overflowing COVID intensive care units which are currently operating at 300 percent above average.

“The question of low oxygen supplies is not limited to our hospital or state, it’s a national problem,” he said.

Not even São Paulo, the richest city in Brazil, is immune to a lack of oxygen in hospitals that treat COVID patients. Less than 12 hours later, similar scenes occurred at the EPA Ermelino Matarazzo hospital on the east side of the capital.

The city reported that 10 patients had to be transferred on Friday night due to a lack of oxygen input. However, São Paulo’s health secretary was also dismissive about inadequate stocks of oxygen, informing Al Jazeera that the problem had been purely technical.

On Monday, the city of São Paulo reported that more than 89 percent of its ICU beds were filled. Meanwhile, the São Paulo state reported a record 1,021 deaths on Monday alone, the highest number since the start of the pandemic.

São Paulo’s health secretary urged Brazilians to respect preventive measures to reduce the transmission of the virus, explosion of hospital demands and depletion of medical supplies.

Fiocruz researcher Orellana also said infections would continue to soar in the next 15 days if state governors do not insist on implementing strict lockdowns in the upcoming weeks.

Tensions between Bolsonaro vs governors

President Jair Bolsonaro, however, has resisted the idea, seemingly fearful of the economic impact and a backlash against his loyal supporters. The country has suffered 10 percent of the world’s COVID deaths, according to the World Health Organization (WHO).

Last Friday, Bolsonaro accused mayors and governors of acting like dictators by ramping up containment measures, in what critics described as a “boycott” against efforts to contain the ferocious second wave.

Bahia Governor Rui Costa accused Bolsonaro in a local TV interview of acting as an “ally to the virus and the country’s wave of deaths”.

Adding to public anger and fear is the fact that, despite the country grappling with the worst health crisis in its history, vaccination remains painfully slow. And high turnover among the nation’s health ministers is not instilling confidence among Brazilians either. Bolsonaro’s fourth health minister since the beginning of the pandemic, Marcelo Queiroga, was sworn in on Tuesday.

Newton de Oliveira, President of the Brazilian Gases Industry (IBG), the country’s only homegrown firm in São Paulo, also blames the federal government’s delayed handling of the pandemic for the catastrophe.

“Preventive measures should have already been taken. There’s been a lack of planning. The government should have treated vaccines as a matter of urgency, in order to avoid the beyond chaotic surge of cases and deaths we’re now facing,” he said.

De Oliveira informed Al Jazeera that Brazil’s oxygen supply is “extremely critical”, where IBG’s demand for oxygen has doubled to 100 percent over the past two months.

“What happened in Manaus is already here. Just today, we had a large influx of people at our plant bringing cylinders to add gas,” he added.

Last week, the Brazilian Association of Health (Abramge) and the Brazilian Chemical Chamber alerted the Ministry of Health and other members of the federal government that medical and oxygen supplies could run out in the next 20 days. But with infections continuing to soar, experts argue it could be sooner than that.

On Saturday, Anvisa, the Brazilian regulating agency for medical products, ordered all oxygen producers to report their production and distribution capacity on a weekly basis.

The Ministry of Health acknowledged the situation on Tuesday, alerting that six Brazilian states’ oxygen levels were critical, especially in central-western states like Acre and Rondonia, as Brazil reported by far its highest single-day deaths since the beginning of the pandemic.

The São Paulo state has since announced that it will install a factory in partnership with the giant beer company Ambev to produce 125 tanks of oxygen per day within the next 10 days. São Paulo’s lieutenant governor also said the state would seek help from the private sector to secure a steady supply of medical oxygen to public hospitals.

To the north, the Amazonas state health secretary (SES-AM) is dismissive of the risk of oxygen shortages, informing Al Jazeera that the state had reached an equilibrium of oxygen supply and demand since its healthcare collapse in January.

However, the neighbouring Rondonia state is at 97.6 percent ICU occupancy and the attorney general’s office warned in a letter last week that the state is “facing an imminent oxygen shortage”. Both Rondonia and Acre have enough supplies for two weeks. In the hard-hit central-western Mato Grosso state, mechanics and gas stations are having to lend oxygen cylinders to hospitals.

Despite Bolsonaro’s criticisms, state governors and mayors have responded by implementing “mini-lockdowns” across the country in a desperate attempt to contain the transmission of the virus and control oxygen and medical consumption levels.

“Now is the time to stay home,” Eduardo Paes, the mayor of Rio de Janeiro, the last coronavirus holdout, urged on a televised address last week.