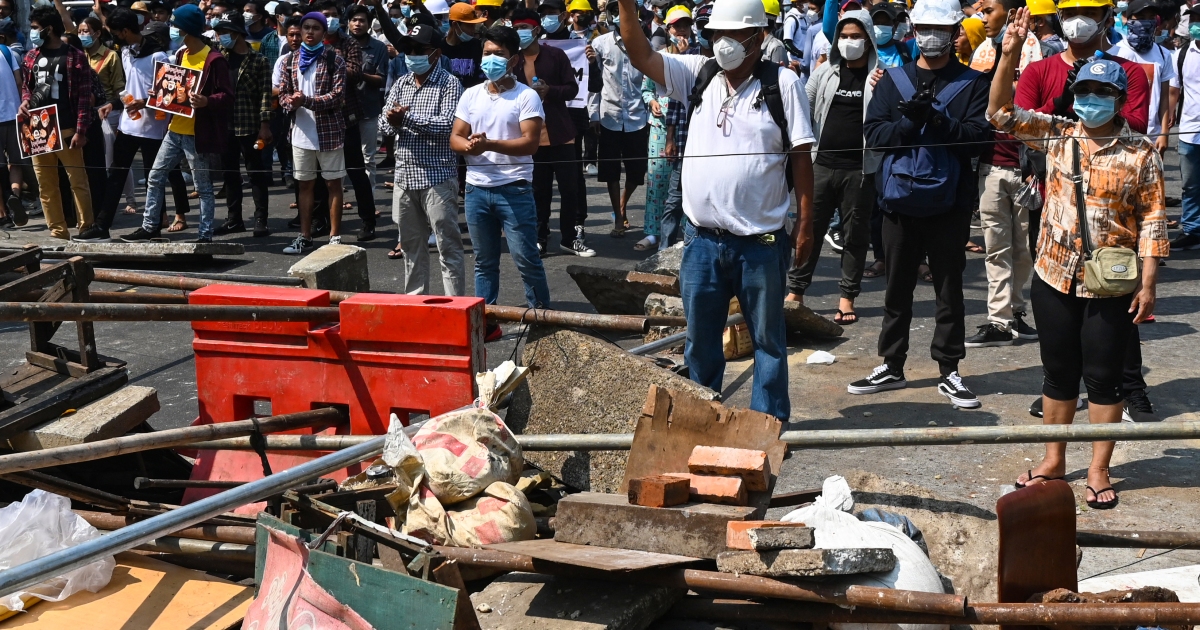 Police in Myanmar moved quickly to stamp out protests against military rule on Sunday, firing live and lobbing stun grenades and tear gas canisters at demonstrators in the main city of Yangon and the southern town of Dawei.

Two protesters were killed during the crackdowns, according to local media.

The Myanmar Now media group posted a video of a wounded man lying on the street near the Hledan Centre intersection in Yangon, and said he had been “shot in his chest area by what appeared to be live ammunition”.

A man who witnessed the shooting told the Frontier Magazine that the police had fired live rounds at protesters sheltering at a bus station and that “one person died and others are wounded”.

Protesters say one man has been killed after police opened fire on people sheltering in a bus stop at Hledan. Several others have been injured. Police began firing live rounds at around 8:45am.#WhatsHappeningInMyanmar #milkteaalliancemyanmar
Read more: https://t.co/g7NJ8V0tMf pic.twitter.com/qyVVNHEidE

A doctor at the hospital the man was taken to confirmed his death to Reuters news agency.

Local media reported that a protester was killed by security forces in southern city Dawei on Sunday morning. The hospital told Dawei Watch media that he passed away from a live bullet wound piercing into his lower right rib area. #whatshappeninginMyanmar #2021Uprising pic.twitter.com/VpT1SAQc80

Sunday’s police action came after state television announced that Myanmar’s envoy to the United Nations, Kyaw Moe Tun, had been fired for betraying the country after he urged the global body to use “any means necessary” to reverse the February 1 coup that deposed elected leader Aung San Suu Kyi.

The military’s power grab and its detention of the country’s civilian leadership have plunged Myanmar into fresh chaos, just a decade after the end of nearly 50 years of strict military rule. For three weeks now, huge crowds have taken to the streets of cities and towns across Myanmar, calling for Aung San Suu Kyi’s release and the restoration of civilian rule.

As the popular uprising gathered steam, security forces have become more aggressive in using force. Three other protesters were killed earlier in February, while the military said a policeman has also been killed.

There was no immediate comment from the Myanmar military.

The violence in Yangon erupted early on Sunday morning when medical students were marching in Yangon’s streets near the Hledan Centre intersection.

Footage showed protesters running from police who charged at them, and residents setting up makeshift roadblocks to slow their advance. Nearby, residents were pleading with police to release those they picked up from the street and shoved into police trucks to be taken away.

Video: Soldiers gunned down a few protesters in Yangon crackdown on Sunday pic.twitter.com/uwifk4ty1p

Police also opened fire and threw stun grenades at demonstrating teachers in the district of Yankin.

Hayman May Hninsi, who was with a group of fellow teachers in Yangon, said “police got out of their cars and started throwing stun grenades without warning”.

“Some teachers got hurt running. We’re assessing the situation and whether to go out again or not.”

#HappeningNow in #Yankin of #Yangon: at least 50 protesters arrested, including doctors and medical students from the medic strike. Another brutal crackdown from the police in #Myanmar. #WhatsHappeningInMyanmar #Burma #BurmaCoup pic.twitter.com/KU6epiddze

In another part of the city, footage showed doctors and students in white lab fleeing as police threw stun grenades outside a medical school.

Despite the crackdown, hundreds of protesters remain on the streets of Yangon, with many of them setting up makeshift barricades and carrying shields to protect themselves.

Youth activist Esther Ze Naw told Reuters people were battling to overcome the fear they had lived with for so long.

“This fear will only grow if we keep living with it and the people who are creating the fear know that. It’s obvious they’re trying to instil fear in us by making us run and hide,” she said.

Police in the second city of Mandalay also fired guns into the air, trapping protesting medical staff in a city hospital, a doctor there told Reuters by telephone. In the northern city of Lashio, police fired tear gas to disperse crowds, according to the Irawaddy news website.

Riot police fired tear gas to disperse anti-regime protesters in Lashio, northern Shan State on Sunday, as locals took to the streets amid a second general strike against the regime. #WhatIsHappeningInMyanmar pic.twitter.com/HBYPPYJEhm

Sunday’s crackdown followed a similar wave of action against largely peaceful anti-coup rallies around the country a day earlier.

State-run MRTV television said 479 people had been arrested on Saturday.

While Western countries have condemned the coup and some have imposed limited sanctions, the generals have traditionally shrugged off diplomatic pressure. They justified the February 1 power grab alleging fraud in an election last November that Aung San Suu Kyi’s National League for Democracy (NLD) won by a landslide.

Senior General Min Aung Hlaing has promised fresh elections, but has not set a date for a new vote.

Aung San Suu Kyi’s party and supporters say the result of the November vote must be respected.

The 75-year-old had spent nearly 15 years under house arrest during military rule. She faces charges of illegally importing six walkie-talkie radios and of violating a natural disaster law by breaching coronavirus protocols.

The next hearing in her case is set for Monday.