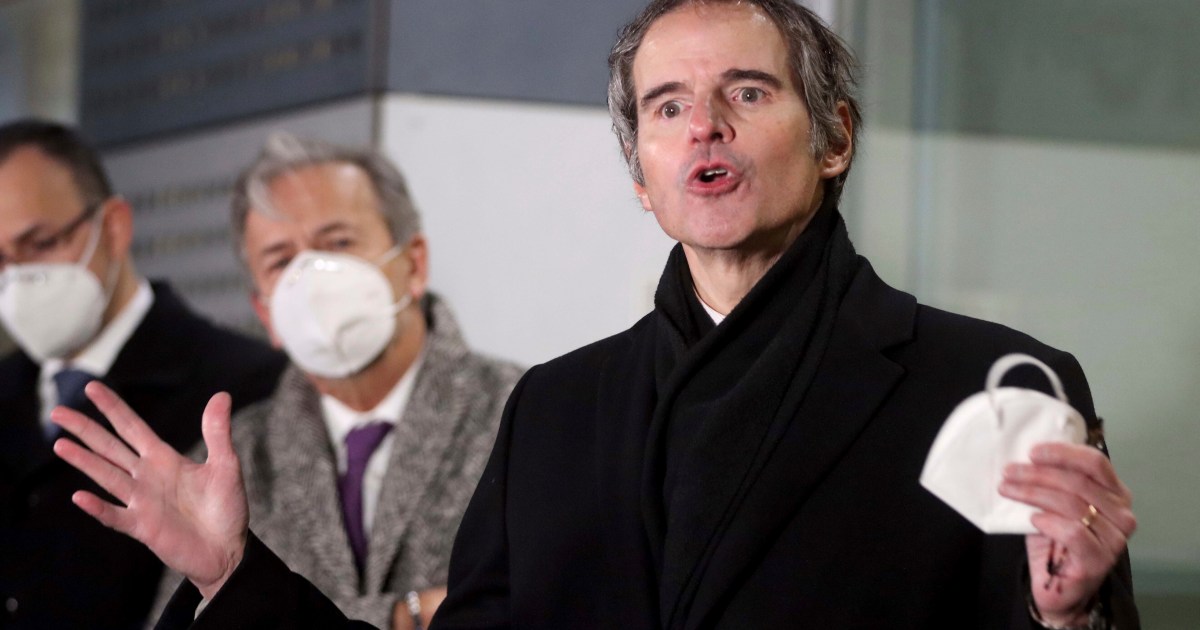 The head of the United Nations’ nuclear watchdog has said the agency reached an agreement with Iran to continue its “necessary” verification and monitoring activities for up to three months, but there will be less access and no more snap inspections from Tuesday.

Speaking to reporters in Vienna on Sunday following his return from Tehran, the International Atomic Energy Agency chief Rafael Grossi said his talks with Iranian officials had produced a “good, reasonable result” that “salvages the situation for now”.

“We reached a temporary bilateral technical understanding whereby the agency is going to continue its necessary verification and monitoring activities for a period of up to three months,” Grossi said.

“We agreed that we are going to keep this understanding we reached under review constantly – so if we want to suspend it or extend it, this can be done,” he added.

“The hope of the IAEA has been to be able to stabilise a situation which was very unstable and I think this technical understanding does it, so that other political consultations at other levels can take place.”

Joint statement by the Vice-President of the Islamic Republic of #Iran and Head of the AEOI and the Director General of the IAEA @RafaelMGrossi.
📝 https://t.co/EpEg0IZGxg pic.twitter.com/3juVR3rvCw

The IAEA chief was careful to say that there still would be the same number of inspectors, but there would be “things we lose”.

He did not offer many specifics, but Iranian Foreign Minister Mohammad Javad Zarif earlier said that would include blocking the IAEA from accessing footage on its cameras at nuclear sites.

Grossi told reporters the law passed by Iran’s parliament would be applied, however, which means the Additional Protocol that allowed the IAEA to carry out snap inspections would be suspended.

“Nevertheless, we decided to go there and agree on a specific, bilateral arrangement… that will allow us to bridge this period in the best possible way without losing the necessary monitoring and verification capacities,” he said.

Al Jazeera’s Mike Hanna, reporting from Washington, DC, said the announcement would potentially “give a greater amount of time for a diplomatic process to get under way” between the US and Iran.

For weeks, the two countries have been at an impasse about efforts to return to the 2015 nuclear deal that saw Iran agree to curb its nuclear programme in exchange for a lifting of international sanctions.

Tehran has gradually scaled back its commitments under the accord after Trump’s unilateral withdrawal in 2018.

Biden has said he wants to rejoin the deal, but his administration has insisted Iran return to full compliance first. Iranian officials have demanded the US take the first step to rejoin the accord and lift its sanctions.

Earlier on Sunday, Foreign Minister Zarif said Germany, France and the United Kingdom – the European signatories to the agreement, formally known as the Joint Comprehensive Plan of Action, or JCPOA – should convince the US to return to the deal.

“That’s not a tall order,” Zarif said during an interview with Iran’s state-owned PressTV.

White House National Security Adviser Jake Sullivan, also on Sunday, said Biden is “prepared to go to the table to talk to the Iranians about how we get strict constraints back on their nuclear programme”, but the ball is in Iran’s court.

“It is Iran that is isolated now diplomatically, not the United States, and the ball is in their court,” Sullivan said in an interview with CBS programme Face the Nation.

Meanwhile, Ali Vaez, Iran Project director at the International Crisis Group, welcomed the IAEA announcement on Sunday, saying the agency “has proven to be the only adult in the room so far”.

“Here is to hoping that Iran & the US learn to be as flexible and creative in achieving their joint objective of reviving the JCPOA,” he tweeted.

The @iaeaorg has proven to be the only adult in the room so far. Here is to hoping that Iran & the US learn to be as flexible and creative in achieving their joint objective of reviving the JCPOA. https://t.co/E6tSiN9wpc

Trita Parsi, executive vice president of the Quincy Institute for Responsible Statecraft, a think tank in Washington, DC, said on Twitter the IAEA agreement “enables a crisis to be evaded” as it allows the Iranian law to come into effect without killing diplomatic efforts.

Parsi urged Iranian and US officials to make “only constructive public statements emphasizing the desire and need for a quick and equitable diplomatic solution” going forward, however.

1 in 4 U.S. adults has gotten a COVID-19 vaccine, plus other numbers from the vaccination effort