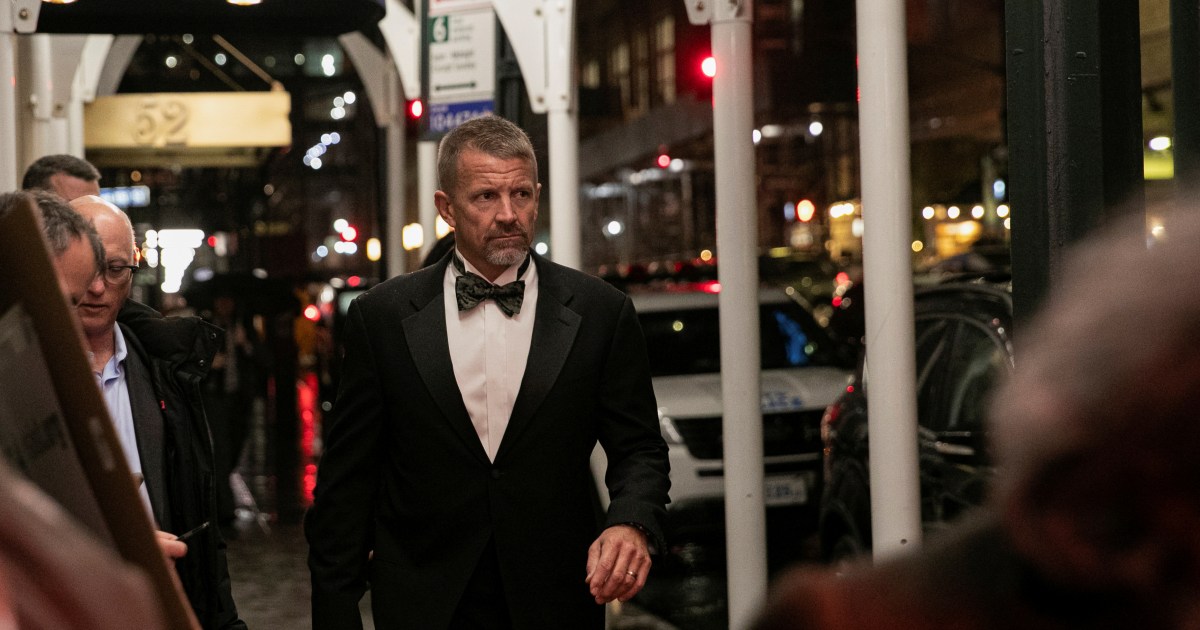 Private security contractor Erik Prince, a close ally of former US President Donald Trump, violated a United Nations arms embargo on Libya, UN investigators have found in a report detailed by US media.

The confidential report to the Security Council, obtained by The New York Times and The Washington Post, and partly seen by Al Jazeera, said on Friday that Prince deployed a force of foreign mercenaries and weapons to renegade military commander Khalifa Haftar, who has fought to overthrow the UN-recognised Libyan government, in 2019.

The $80m operation included plans to form a hit squad to track and kill Libyan commanders opposed to Haftar – including some who were also European Union citizens, The New York Times said.

Prince, a former Navy SEAL and brother of Trump’s education secretary Betsy Devos, drew infamy as the head of the Blackwater private security firm, whose contractors were accused of killing unarmed Iraqi civilians in Baghdad in 2007.

Four who were convicted were pardoned by Trump last year.

The accusation exposes Prince to possible UN sanctions, including a travel ban, the Times said.

Prince did not cooperate with the UN inquiry and his lawyer declined to comment to The New York Times, it added.

Anas el-Gomati, director of Libyan think tank Sadeq Institute, told Al Jazeera that using private military contractors can allow leaders to deny involvement in conflicts where they cannot be seen to be complicit for diplomatic or legal reasons.

“[In these situations] people like Erik Prince’s currency goes right up. And the real aspect here, as we’ve seen with Russia and the [private military firm] Wagner Group – and how they’ve been deployed in several theatres including Libya – is that they offer a beautiful, eerie, and in fact disastrous kind of deniability to any government,” he said.

“You can outright refuse that you have any knowledge of what is going on,” he said.

Oil-rich Libya has been torn by civil war since a NATO-backed uprising led to the toppling and killing of dictator Muammar Gaddafi in 2011.

The country has in recent years been split between a Government of National Accord (GNA) in Tripoli, backed by Turkey, and an eastern-based administration, whose forces are led by Haftar and backed by Russia, the UAE, and Egypt, among others.

Then-President Trump in 2019 praised Haftar – who has faced accusations of war crimes – for his role in “fighting terrorism” in Libya.

A new interim executive for the country was chosen on February 5 by the Libyan Political Dialogue Forum in Switzerland, comprising 75 participants selected by the UN to represent a broad cross-section of society.

Haftar has pledged his support for the initiative.