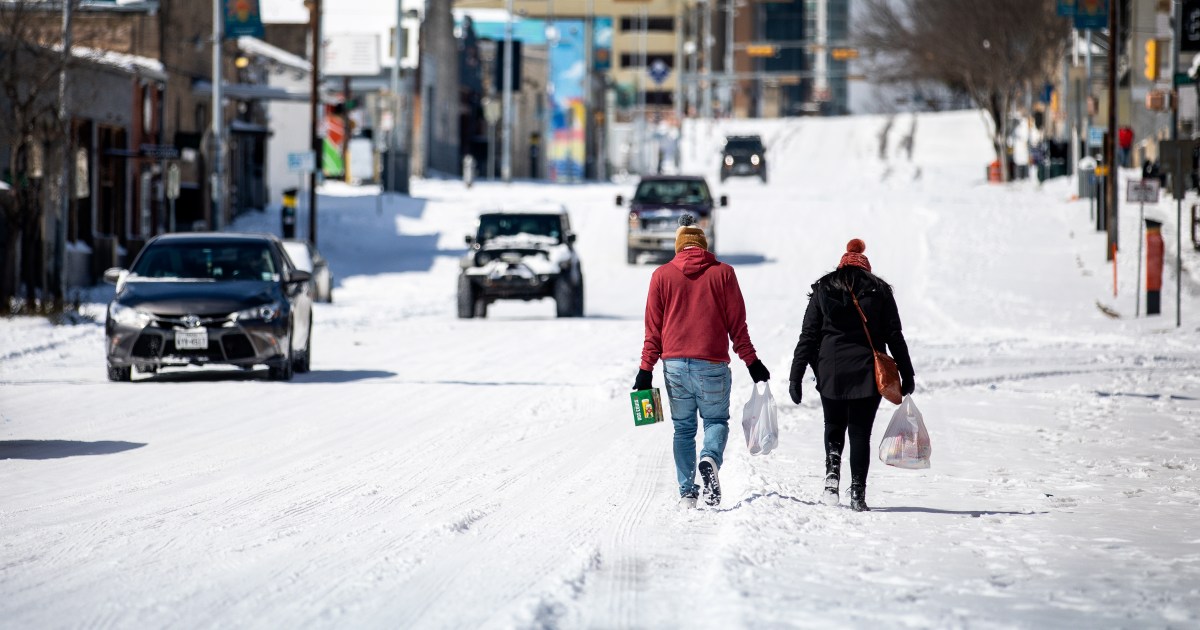 About 7 million people in Texas – a quarter of the United States’s second-most populous state – have been told to boil their water or stop using it entirely as homeowners, hospitals, and businesses grappled with broken water mains, burst pipes and power outages.

Winter storms during the past week in the Midwest, Texas and the South forced water service providers to scramble to manage flows as sub-freezing temperatures set in. Nearly 3.4 million customers around the US were still without electricity on Wednesday.

The Texas city of Kyle, south of Austin, asked residents on Wednesday to suspend water usage until further notice because of a shortage.

“Water should only be used to sustain life at this point,” the city of 45,000 said in an advisory. “We are close to running out of water supply in Kyle.”

In Memphis, Tennessee, the power and water company asked residents to reduce their water usage through Friday.

Memphis, Light, Gas & Water (MLG&W) said in a news release that it is experiencing reduced pressure across its distribution system due to freezing temperatures this week.

The utility also said it is seeing reduced reservoir levels at pumping stations and several water mains have burst.

Oklahoma City officials said on Twitter that power outages and extremely low temperatures had caused water service interruption and low pressure for customers. Crews helped turn off water for thousands of customers who had their private water lines break.

Three hospitals in Shreveport, Louisiana, lost water because of the storm, KSLA-TV reported. City fire trucks delivered water and officials were getting bottled water for patients and staff.

In the southwestern Louisiana city of Lake Charles, hospitals were faced with the possibility they might have to transfer patients to other areas because of low water pressure that followed a power outage, Mayor Nic Hunter said.

The cold snap, which has killed at least 21 people, is not expected to let up until this weekend. The deep freeze has also shut in about one-fifth of the nation’s refining capacity and closed oil and natural gas production across Texas.

The outages in Texas also affected power generation in Mexico, with exports of US natural gas via pipeline dropping off by about 75 percent over the last week, according to preliminary Refinitiv Eikon data. Texas Governor Greg Abbott directed the state’s natural gas providers not to ship outside Texas and asked state regulators to enforce that ban, prompting reviews.

The Mexican government called the top US representative in Mexico on Wednesday to press for natural gas supplies as power cuts hit millions in northern Mexico.

In Austin, residents were told Wednesday night to boil their water after the city’s largest treatment plant lost power.

The worst US outages by far have been in Texas, where 3 million homes and businesses remained without power as of midday on Wednesday.

Austin Energy, the local power company in the capital city of 950,000, said tens of thousands of area customers were also without electricity. Although they were able to start restoring power in some spots, it was not expected to stay on indefinitely.

Houston residents were also told to boil their water – if they had power to do so – because of a major drop in water pressure linked to the weather.

Beto O’Rourke, a former Democratic presidential candidate from Texas, told MSNBC television the situation in the Lone Star State was “worse than you are hearing”.

“So much of this was avoidable,” O’Rourke added.

“The energy capital of North America cannot provide the energy needed to warm and power people’s homes in this great state. We are nearing a failed state in Texas.”

“Cruz seems to believe there isn’t much for him to do in Texas for the millions of fellow Texans who remain without electricity/water and are literally freezing,” said journalist David Shuster on Twitter.

Just confirmed @SenTedCruz and his family flew to Cancun tonight for a few days at a resort they’ve visited before. Cruz seems to believe there isn’t much for him to do in Texas for the millions of fellow Texans who remain without electricity/water and are literally freezing. pic.twitter.com/6nPiVWtdxe