The Permian Basin, which is located in New Mexico and Texas, is the worst affected, with output down between 65 percent and 80 percent from normal levels, traders and executives say.

Total U.S. oil production has plunged by close to 40% — the most ever — as an unprecedented cold blast freezes well operations across the central U.S., according to traders and industry executives with direct knowledge of the operations.

Crude output has now fallen by more than 4 million barrels a day nationwide, they said, asking not to be identified because the information isn’t public. Before the cold snap, the U.S. was pumping about 11 million barrels a day, according to government data. The estimate of oil production losses has climbed steadily over the last three days as companies and traders assess the situation.

Amrita Sen, chief oil analyst at consultant Energy Aspects Ltd., said the production losses were “much higher than initial estimates” and warned that Permian output may not return to pre-freeze levels until Feb. 22.

“As producers need pipes to be fully running and power prices to normalize before they return production, a substantial return in production may not occur until this weekend at the earliest,” she said in a note to clients.

Operations in Texas have stumbled because temperatures are low enough to freeze oil and gas liquids at the well head and in pipelines that are laid on the ground, as opposed to under the surface as practiced in more northerly oil regions. The big question now is how quickly temperatures return to normal.

The huge scale of the disruption has helped oil prices rise to their highest so far this year. It’s also threatening to starve refineries, although such is the chaos in Texas currently that many of the largest plants have already had to shut down. 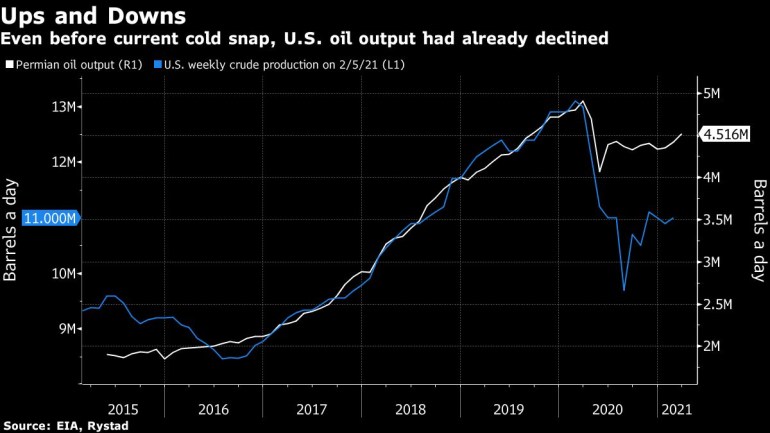 Among the companies hit by outages are Occidental Petroleum Corp., the second-largest producer of oil in the Permian, which has issued a force majeure notice to suppliers, and Chevron Corp., which has shut in compression and production at wells in Culberson County in West Texas due to cold weather.