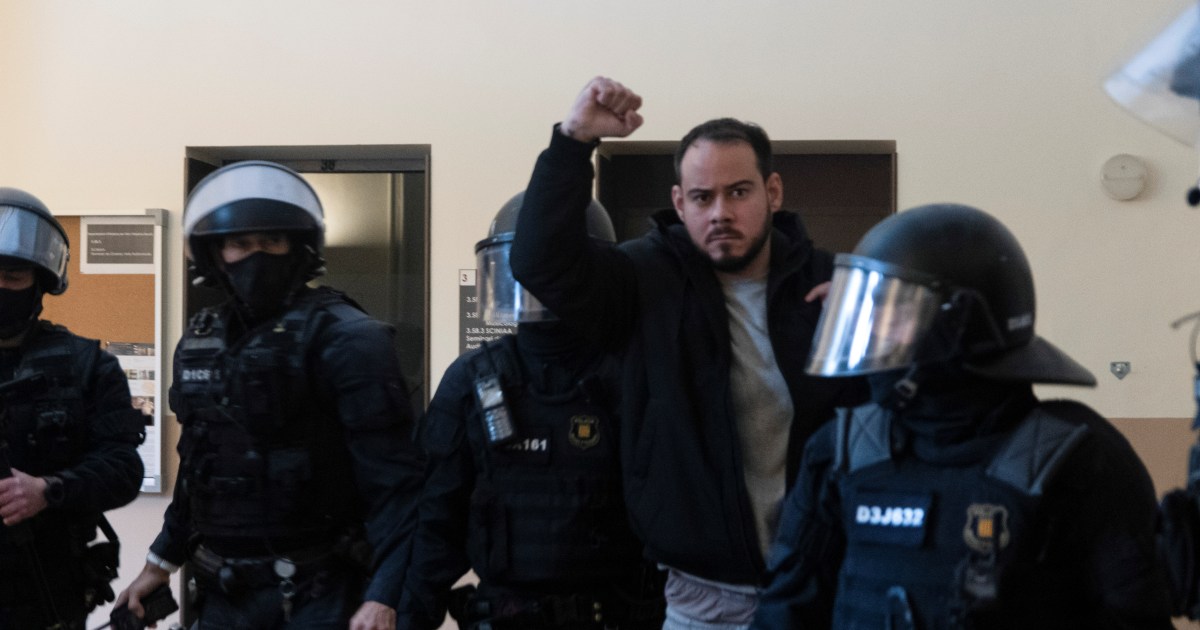 Officers in riot gear storm Lleida University, in northeastern Spain, where Pablo Hasel had barricaded himself in.

Spanish police have stormed a Catalan university to arrest a rapper who barricaded himself inside after he was sentenced to jail on charges of glorifying “terrorism” and slandering the crown and state institutions.

Pablo Hasel and dozens of his supporters took refuge in Lleida University, some 150 kilometres (90 miles) west of Barcelona, on Monday. He had been given until Friday night to turn himself in to begin serving his nine-month sentence.

Dozens of officers in full riot gear entered the university on Tuesday and removed the barricades.

Spanish television showed the 33-year-old being escorted out by the police, saying: “They will never make us give in, despite the repression,” with his fist raised.

Hasel’s case has raised public alarm over the prosecution of speech crimes in Spain, with protests in the capital, Madrid, and Barcelona.

He has also accused police of torturing and killing demonstrators, as well as targeting migrants and refugees.

Hasel was initially convicted in 2018 over lyrics and tweets that included references to banned rebel groups, compared a court to Nazis, and called former King Juan Carlos a mafia boss.

More than 200 artists, including film director Pedro Almodovar, actor Javier Bardem and singer Joan Manuel Serrat, signed a petition against his imprisonment, and the case led the government to ease some restrictions on free speech.

“The imprisonment of Pablo Hasel makes even more evident the Sword of Damocles hanging over the heads of all public figures who dare to publicly criticise the actions of any of the state institutions,” the petition said.

Last week, Spain’s government promised to reduce the penalty for “crimes of expression” such as the glorification of “terrorism”, hate speech, insults to the crown and offences against religious sensibilities, in the context of artistic, cultural or intellectual activities.

The Hasel episode echoes the case of another rapper, Valtonyc, who fled to Belgium in 2018 after being convicted of similar crimes.

Spain is trying to extradite him but Belgium has refused on grounds that his offences are not a crime under Belgian law.