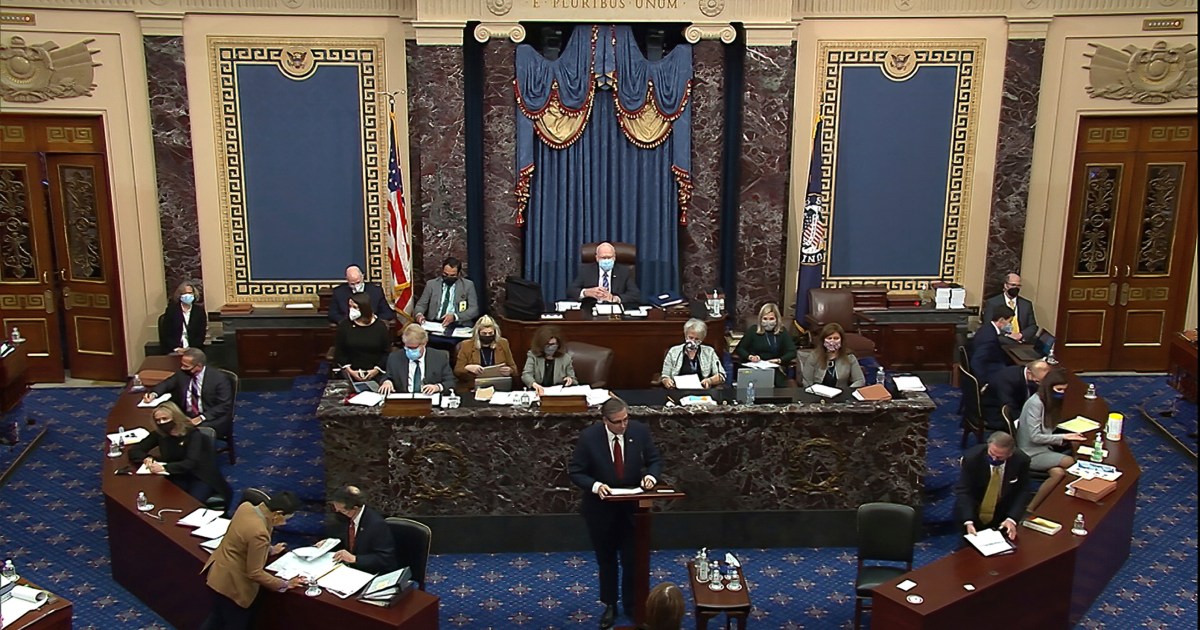 Donald Trump’s second impeachment trial could conclude on Saturday, leaving a divided US Senate to decide whether the former president incited his supporters to attack the US Capitol on January 6 in a last-ditch effort to stay in power after his November election defeat.

Trump is the first US president to be impeached twice and the first to face trial after leaving office. If convicted, the Senate could then vote to bar him from running for office again.

Conviction is seen as unlikely, however, as at least 17 Republicans in the 100-seat chamber would have to join all 50 Democrats to find the former president guilty.

Only six Republicans voted with Democrats to move forward with the trial, rejecting an argument made by other Republican senators that the constitution does not allow Congress to impeach a president who has already left office.

Richard Pacelle, a professor of American politics at the University of Tennessee, told Al Jazeera that the American public is split on impeaching Trump.

“Impeachment is a pretty political weapon,” he said. “Around 60 percent support conviction and 40 percent don’t.”

He said the partisan divide in the US is “very bad” but suggested that there could be a slight move towards the political centre, with some Republicans in Congress voting with Democrats to convict Trump.

“With 10 Republicans in the House and maybe six or seven set to cross in the Senate, and with about 140,000 people in the last few days renouncing their membership of the Republican Party, we may be seeing a little bit of a movement back towards the middle,” he said.

Questions about Trump’s role in riot

The trial has highlighted the extraordinary danger lawmakers faced on January 6, when Trump urged his followers to march to the Capitol and “get wild” in an effort to prevent Congress from certifying his defeat to Democrat Joe Biden in the presidential election. Five people died in the chaos.

Security camera footage presented at the trial showed rioters came perilously close to lawmakers as they were evacuated from the Senate and the House of Representatives.

Among those targeted was Vice President Mike Pence, who had refused Trump’s entreaties to interfere with the proceedings earlier that day.

Trump criticised Pence on Twitter as lacking “courage” shortly after Republican Senator Tommy Tuberville told Trump that the vice president was being evacuated for his own safety.

Trump’s lawyers gave conflicting answers on Friday when asked if Trump knew Pence was in danger when he issued his tweet. Several Republican senators said they still had questions about Trump’s role.

“The issue is what was the president’s intent, right? Only the president could answer. And the president chose not to,” Republican Senator Bill Cassidy told reporters. He said he had not made up his mind on how to vote.

Trump refused to testify in the trial.

House Democrats making the case for impeachment have argued that Trump set the stage for violence through repeated – and baseless – claims that the election results were fraudulent. They say he summoned the mob to Washington, DC, gave the crowd its marching orders and did nothing to stop the violence as it played out on television.

“I don’t know, at this point, how many minds get changed,” Senator John Thune, the chamber’s number two Republican, told reporters on Friday.

As many as 10 Republicans could find Trump guilty, according to a Senate aide, which would still be short of the 67 votes needed for conviction. Republican Senate Leader Mitch McConnell, who reprimanded Trump after the January 6 attack, remains a question mark.

Meanwhile, Trump’s impeachment lawyers have accused the Democrats of waging a campaign of “hatred” against the former president, a day after they vigorously denied Trump had incited the deadly riot.

According to Al Jazeera’s Heidi Zhou-Castro, Trump’s defence team has three prongs to their argument.

“One being that this trial is unconstitutional because it is trying a former president for the very first time,” Zhou-Castro said, speaking from Capitol Hill in Washington, DC.

“They also say that the First Amendment protected Trump’s political speech. They showed videos of Democrats using similar language like ‘fight’ in some of their political talk.”

The third argument is that Trump’s lawyers say the trial “lacked due process”, she continued, which is another reason for it being “unconstitutional” in their point of view.

Trump’s first impeachment trial, which stemmed from his efforts to pressure Ukraine to investigate Biden, ended in an acquittal a year ago in what was then a Republican-controlled Senate.

1 in 4 U.S. adults has gotten a COVID-19 vaccine, plus other numbers from the vaccination effort