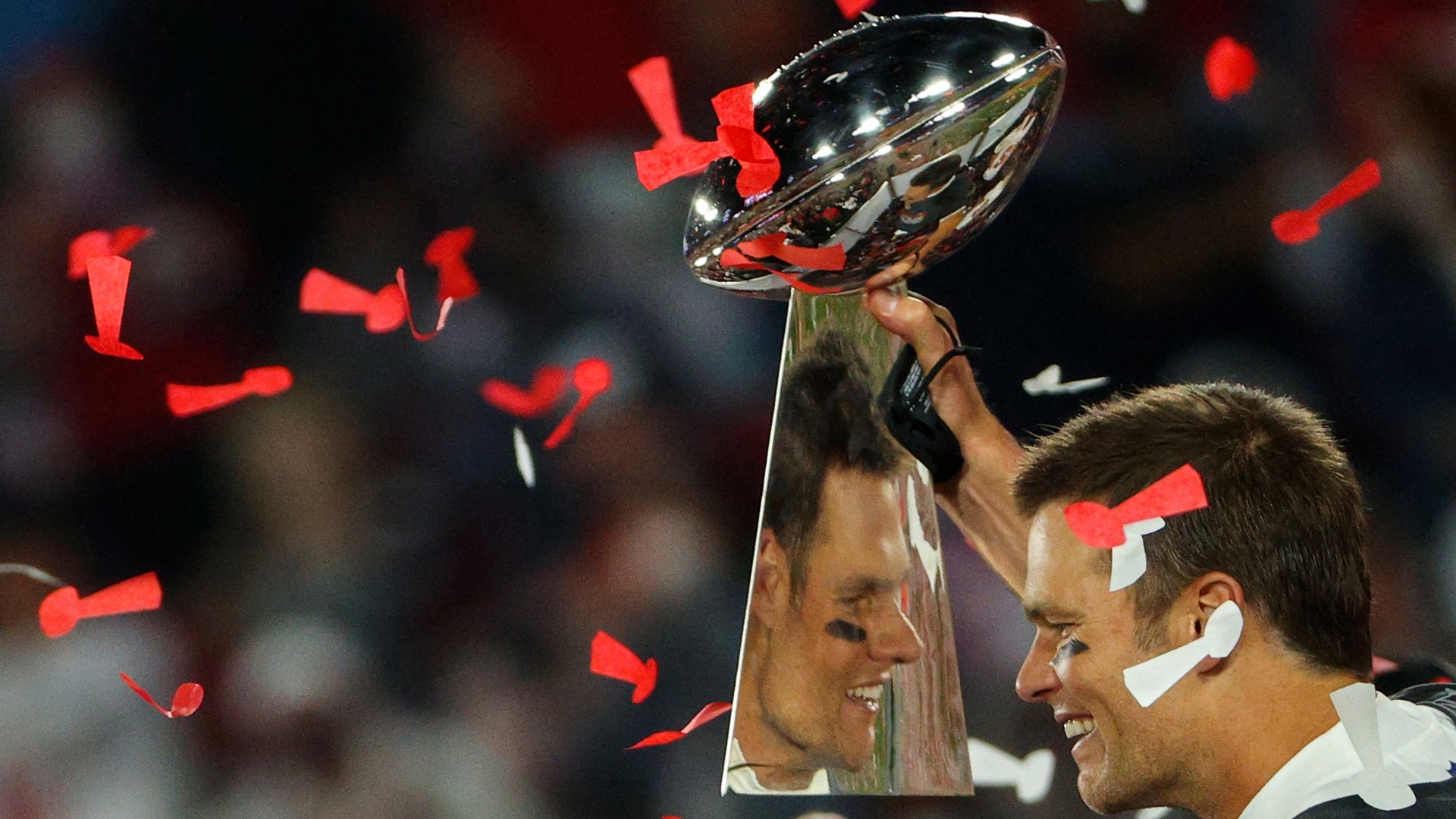 It doesn’t matter how you frame the GOAT conversation.

Tom Brady — who led Tampa Bay to a 31-9 victory against Kansas City in Super Bowl 55 for his seventh championship on Sunday — belongs in every one of those all-time arguments. The five-time Super Bowl MVP will always be a part of those debates no matter how much you try do deny it.

There is a lot of that going on right now. The Brady hater’s contrarian playbook aims to diminish those accomplishments, even after Brady won his latest championship at 43 years old. Countless social media users are scrambling for alternatives — any alternative — to knock Brady down a peg in those GOAT talks with tweets ranging from Ronaldo to Ric Flair.

Well, almost everybody. Los Angeles Lakers star LeBron James, no stranger to these conversations, tweeted his appreciation for Brady after Super Bowl 55.

MORE: Tom Brady’s seventh ring puts him out of reach for anyone else

Yes, you can make the case he is the GOAT of GOATs.

Don’t believe it? We break down those five pillars of greatness:

At minimum, Brady is the most-accomplished player to play the quarterback position in the NFL. What argument can you make against that?

Brady has the stats. He has the most TD passes (581) and will join Drew Brees in the 80,000-passing yard club next season. If Brees retires, then Brady (79,204) will likely finish as the all-time leader in that category, too.

Brady has the awards. He is a three-time MVP and five-time Super Bowl MVP. Peyton Manning has five MVP awards, but he also has five fewer Super Bowl rings. Brees and Manning are statistical machines too, but they don’t have the championships.

Above all, Brady has the rings. He has seven Super Bowl championships. That’s more than any franchise in the NFL. No quarterback is even close.

Were there more-talented quarterbacks? You can make the case for John Elway, Dan Marino and Aaron Rodgers. Those three quarterbacks have combined for three Super Bowl championships. Their talent does not supersede Brady’s accomplishments on the field.

Brady’s talent is almost under-appreciated, especially at his age. In his 21st NFL season, Brady passed for 4,633 yards, 40 TDs and 12 interceptions, all impressive numbers that went relatively unnoticed during the MVP race between Rodgers and Patrick Mahomes II.

So, Brady did what he usually does instead: He led a Super Bowl run, with a new team in his first season, by going through Brees, Rodgers and Mahomes. When all of those quarterbacks are in the Hall of Fame years from now, it will be considered one of the greatest Super Bowl runs in playoff history.

Of the 10 quarterbacks listed on the “NFL 100” team, Brady is the best quarterback. Sorry Otto Graham, it is what it is.

Now, is he the best player?

If you want to make it a positional argument, then that’s fine. USA Today released their top 100 NFL players of all time  in 2019, and Brady was sandwiched between Jerry Rice and Lawrence Taylor at No. 2. Toss in Jim Brown at No. 4, and that would be the most-submitted Mount Rushmore.

Which one of those other players is the undisputed best player at their position? Rice has the most receiving yards (22,895) and TDs (197) of all time, and he might have the best case of the three. He is statistically the best receiver of all time, and there is a gap with the competition. Again, Randy Moss and Terrell Owens might be more talented, but they aren’t more-accomplished than Rice.

Brady is still going at 43 years old, and with each Super Bowl victory he is creating distance from that pack of all-time legends. Ask this question one more time: What is the most important position in football?

Quarterback is the right answer. You can pick one of those other players, but when you factoring other team sports Brady’s name would filter to the top the most.

There is a reason James tweeted about Brady’s seventh ring. That is a standard by which the team-sports legends are judged on.

James would know. The four-time NBA champion has been permanently installed in the basketball argument with Michael Jordan, who won six championships with the Chicago Bulls in the 1990s. Yet Kareem Abdul-Jabbar remains the game’s all-time leading scorer, and Bill Russell won the most rings.

Wayne Gretzky has more goals, assists and points than any other player in NHL history, and he won four Stanley Cups. Lionel Messi or Cristiano Ronaldo would be the soccer answer. Baseball would bring out Babe Ruth, Hank Aaron or Willie Mays.

Even Yogi Berra is being pulled out there to try and make a case against Brady.

You’re really going to argue Berra over Brady? That one should be over before it gets started.

MORE: Brady’s seventh title puts him up with some of Yankees’ greatest players

Take your pick between Jordan and James (or both). Gretzky is fine, too. But Brady has the same statistical accomplishments and awards, and he has the most championships.

He is on that Mount Rushmore, too.

This is an entirely subjective category used to rank athletes.

No baseball players had a larger impact than Ruth, who hit 714 home runs with the Yankees. Muhammad Ali, the first three-time heavyweight champion, was at the center of the Civil Rights movement with Jim Brown in the 1960s. Jordan helped globalize the NBA game and become the standard for marketing athletes. James has taken on that role in in the social media era; where athletes have become more socially conscious than ever before.

That’s not to say Brady hasn’t made an impact on our culture. The NFL remains the most-watched sport in the United States, and Brady has dominated the Super Bowl for two decades.

This has become one of the arguments against Brady, and it’s because of the popularity contest factor. Detractors diminish Brady’s accomplishments because of Spygate and Deflategate, and those are valid criticisms. Brady’s relationship with Donald Trump was scrutinized in the last two political elections. Anything goes when coming after Brady.

Simply put, Brady hate is strong in the social media era. This is probably the strongest arguments used against Brady, because it’s used to take away from that GOAT factor.

The term GOAT has become overused in these arguments, mainly because there is always more than one acceptable answer and nobody is wrong.

We haven’t even talked about individual sports. Serena Williams, Roger Federer, Rafael Nadal, Jack Nicklaus, Tiger Woods and Michael Phelps would be the next crop of athletes that pop up in these conversations.

This is an apples-to-oranges comparison. There is no question those six dominated their spots, and these athletes have more individual titles.

Williams needs one more Grand Slam singles title to tie the record of 24. Phelps won 23 gold medals. Federer and Nadal have 20 Grand Slam singles apiece. Nicklaus won 18 Majors, which is three more than Woods at 15. If you want to stump for any of those athletes based on that in-sport domination, then that’s fine.

The exchange rate with team sports is tough, and when putting together that list it’s always difficult. ESPN was the last to take that on in comprehensive fashion with its SportsCentury campaign at the end of the 20th century. The top five on that list were Jordan, Ruth, Ali, Brown and Gretzky.

Of those, four of those five were team-sports athletes. That was a generally acceptable list at the time.

How much have times changed?

The athlete with the best all-around case to crack that top five since the 21st century is Brady, who won his first Super Bowl on Feb. 3, 2002 and has continued to dominate the sport that captivates the country’s attention most. Woods and Williams have compelling arguments, but James would be next.

James is the most-captivating athlete of the 21st century. He is chasing what Brady has. The championship argument always weighs the most when separating the that handful of athletes that are considered GOATs.

Brady has that case to be No. 1 with seven championships. If James can pass Jordan match that in the twilight of his NBA career, then there is a good chance he will be the hands-down GOAT of GOATs. James has that same combination as Brady, and that comes with 49 million Twitter followers.

That’s a conversation that could define the rest of the 21st century, and there is no logical reason to leave Brady out of any of those arguments. The nitpicks are manufactured and easily distributed on social media, but Brady continues to win right in their face.

How can you argue against that considering what he did in Tampa Bay this season? He left the Bill Belichick bubble in new England led a 7-9 franchise to the Super Bowl. He wants to take a run at a possible eighth Super Bowl championship in 2021.

There is no valid argument against Brady’s greatness (or GOATness) at this point.

He will always be in the conversation, like it or not, because he keeps winning.

That’s what the GOATs do best.

Any argument to the contary simply does not hold up.