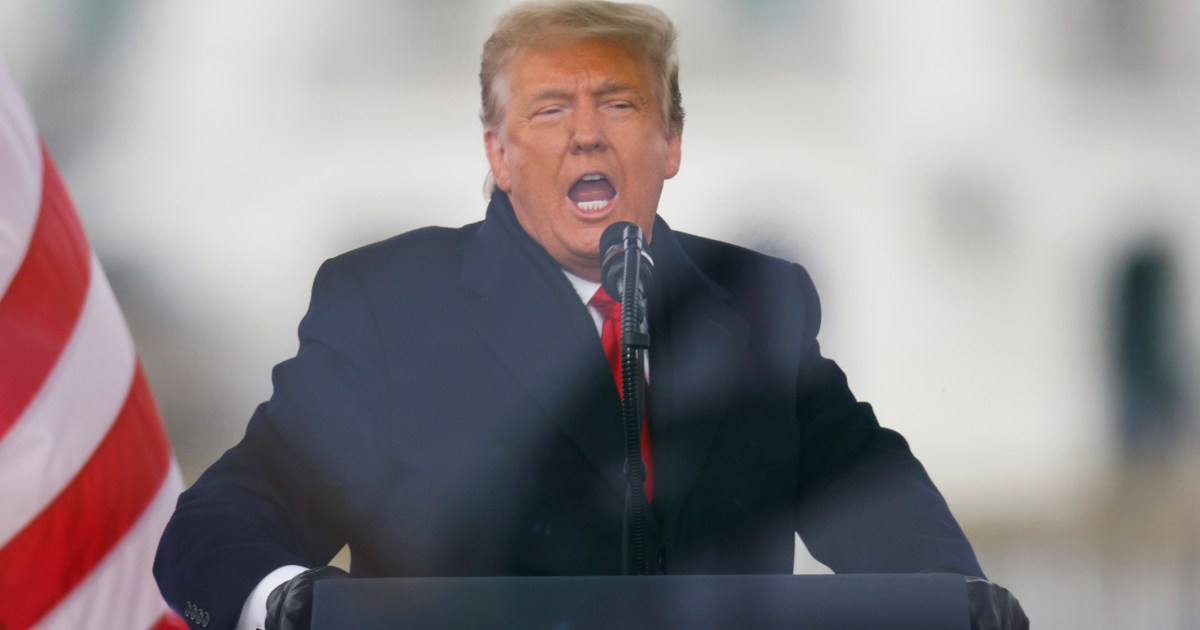 On the day before Trump’s impeachment trial begins, his lawyers are arguing he did not incite last month’s violence.

Former President Donald Trump’s lawyers are insisting he did not incite a riot at the US Capitol last month and argue that his impeachment by the House of Representatives should be dismissed by the Senate this week.

In a pre-trial brief filed on Monday before Tuesday’s impeachment trial in the Senate, Trump’s legal team, Bruce Castor and David Schoen, offered a robust response to House Democrats’ charges that the former president is guilty of “incitement of insurrection”.

Democrats pointed to Trump’s speech to supporters just before the riot at the Capitol, where he called for them to “fight” to prevent the certification of Joe Biden’s Electoral College victory, as evidence of “incitement”.

Trump’s lawyers argue that in addition to his remarks being protected by the US Constitution’s First Amendment, which guarantees the freedom of speech, “not a single word encouraged violence or lawlessness, explicitly or implicitly”.

In the brief filed on Monday, the lawyers offered a litany of evidence to bolster the arguments they filed last week in response to the House Democrats’ article of impeachment, prosecuting Trump with “incitement”. Trump’s legal team said that in addition to his speech not being an incitement, the impeachment process is out of order and his impeachment should be dismissed by the Senate.

They claim that he did not receive “due process” during the House impeachment process last month and argue that this week’s Senate trial is “unconstitutional” because they believe that a former president cannot be convicted and removed from an office he no longer holds.

In addition, his legal team is slamming House Democrats’ “hunger for this political theater” calling it a “danger to our Republic democracy [sic] and the rights that we hold dear”.

“[T]his was only ever a selfish attempt by Democratic leadership in the House to prey upon the feelings of horror and confusion that fell upon all Americans across the entire political spectrum upon seeing the destruction at the Capitol on Jan. 6 by a few hundred people,” the lawyers wrote in their brief.

“Instead of acting to heal the nation, or at the very least focusing on prosecuting the lawbreakers who stormed the Capitol, the Speaker of the House and her allies have tried to callously harness the chaos of the moment for their own political gain,” they added.

Former President Trump was impeached by the House of Representatives on a charge of “incitement of insurrection” after the US Capitol was invaded by his political supporters on January 6.

Trump had hosted a rally of supporters near the White House on the same day Congress was meeting to certify Joe Biden’s election victory. In fiery speech Trump had urged them to march on the Capitol.

Trump’s lawyers argue in their legal brief that Trump cannot be blamed for the riot at the Capitol because, according to media reports, law enforcement agencies had reports of a potential attack days before Trump’s speech.

“Either the president incited the riots” as Democrats claim, “or the riots were pre-planned by a small group of criminals who deserve punishment to the fullest extent of the law,” Trump’s lawyers said.

Students are struggling to read behind masks and screens during COVID, but ‘expectations are no different’