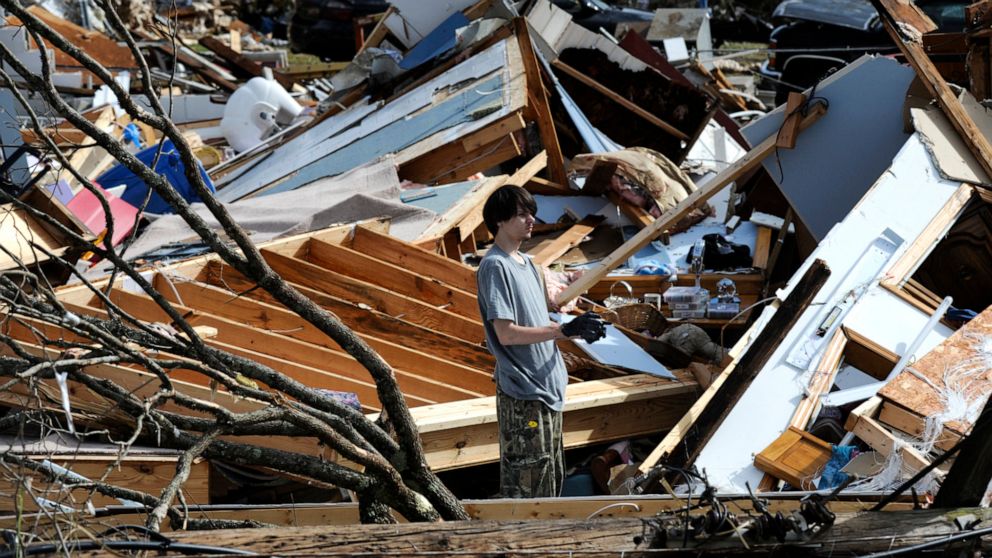 FULTONDALE, Ala. — James Scott has never lived anywhere other than a two-story house on hilly Darlene Drive north of Birmingham. Home will never be the same after a tornado smashed the structure into pieces, killed another teen and left the community devastated in the middle of the night.

Standing in the middle of the destruction Tuesday, the 19-year-old stared blankly at the rubble for a few moments, seemingly unsure what to do next.

“It’s time to regroup and start clean,” he said. “It’s the best I can hope for.”

The terrifying nighttime tornado that blasted through suburban Birmingham late Monday, trapping entire families in the remnants of shattered homes and injuring 30, left a trail of destruction that stunned even longtime residents used to Alabama’s violent weather.

“The people of Alabama are praying for y’all this morning. And we’re here as a sign of our commitment to your recovery,” Ivey said at a press conference where she offered condolences to the people of Fultondale and Center Point, and to the family of 14-year-old Elliott Hernandez, who was killed. “Homes and business can be rebuilt, but losing a young soul to a storm like this is beyond heartbreaking.”

Hernandez, a ninth-grader, was killed and several relatives were critically injured when their home collapsed, trapping them in the basement, Fultondale Police Chief D.P. Smith said.

“They were doing what they were supposed to be doing,” Smith said.

Tim Herring, who survived the twister by huddling in a bathtub with wife Patti Herring as winds ripped off the roof of their house and splintered walls, had followed weather forecasts during the day and didn’t expect the worst until it happened.

“I’ve helped folks after tornadoes,” he added. “This time, it’s us.”

Across the road, Jason Williams struggled to explain how he, his wife Renee and their two daughters made it out alive after their home collapsed, trapping them in the basement shelter where they’d sought refuge.

“God had his mighty hand on us. That’s all I can say. God protected us last night,” said Williams, who had a cut on his forehead and bruises on his legs but was otherwise OK.

Many others narrowly escaped with their lives. At least 30 people were injured as the tornado carved a 10-mile (16 kilometer) path through Birmingham’s northern suburbs, an area severely damaged by a much larger tornado a decade ago.

Search efforts continued for hours in neighborhoods where it was difficult to tell where houses had stood. Across the wrecked landscape, every visible structure was damaged or destroyed. Pieces of children’s toys and clothing were scattered across the terrain littered with broken trees. Fallen utility lines crisscrossed roads.

Located about 10 miles (16 kilometers) north of Birmingham, Fultondale is home to about 9,000 people. It’s mostly middle class with a mix of new subdivisions and older homes.

The National Weather Service said the twister was an EF- 3 with 150 mph (241 kph) winds, capable of severely damaging well-constructed buildings.

Government records show Alabama ranks fourth among states for the number of tornadoes since 2011 with 765, behind Texas with 1,193; Mississippi, 908; and Kansas, which had 868. Last year, Alabama had 78 tornadoes, which was more than Kansas and Oklahoma combined.

The twister Monday wasn’t the first twister for Fultondale, which also caught the tail end of an EF-4 tornado that ripped across Alabama from Tuscaloosa to northern Jefferson County on April 27, 2011, killing 65 people and injuring 1,500 along a path more than 80 miles (130 kilometers) long, according to the weather service.

Herring already had gotten ready for bed when a warning siren went off and a TV forecaster said the storm was headed toward their home. He said he put on some pants and began looking for his wife’s two cats when they realized they were out of time.

“We ran in the bathroom, got down in the tub and covered over with some towels and then in about two minutes it was all over,” Herring said.

The couple was covered with boards and pieces of walls afterward, but neither was seriously hurt. “We got out and my wife said, ‘We don’t have a roof.’ I walked in the hallway and said, ‘We ain’t got no walls either.’ I said, ‘We’re lucky to be alive, Patti,’” Tim Herring said.

Sobbing, Patti Herring was shaken and as she picked through the debris looking for a missing cat and her late mother’s cherished belongings.

At what was left of Williams’ home nearby, he and some helpers celebrated a small victory amid the devastation: They rescued the family dog Smokey from where it was trapped by falling debris. The dog spent hours near what was left of the basement room where the four-member family sought refuge with no time to spare.

“As soon as we got in there it hit, and it all came down on top of us,” Williams said.

Saving the dog was no small thing for a family that lost everything else, he said.

“I’m just so proud that Smokey is OK. One of my daughters had some guinea pigs and the other one had a turtle. and I can’t find them. I just found part of the guinea pig cage,” he said.